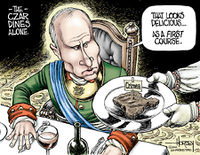 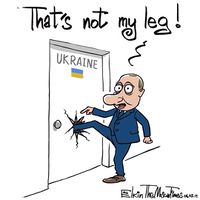 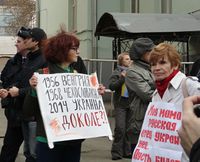 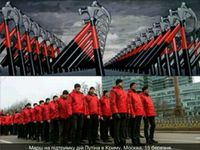 2014.03.20.Letter represents the letter to the head of one Christian community

The letter below is part of the long discussion about role of Christianity in the modern human society. I defend my point of view, that any religion should be evaluated by the results of activity of its adepts - fired books, killed scientists, initiated wars,.. and, of course, saved lives, scientific discoveries, stopped wars, etc.. From my point of view, now any peaceful religion should help to stop the Russian aggression into the neighbour countries.

I read my letter again, and I think, it has sense by itself, even without the context. May be, someone finds any defect in my argumentation and indicates it.

Making my choice to work at Japan, the important criterion was just that you mention: "complete peace". I had believed, that Japan in the most peaceful place to work: during more that a half-century, Japan did not export its democracy to other countries, nor had been attacked in this way. Hope, you know my opinion about the "Democracy for export"..

Since the USSR, Russia did not seem to me to go in the right way: There was no tribunal on the Soviet Veterans; they were not judged, not executed, nor jailed; even the lustration of the Soviet Veterans was not performed. So, I had declared that I do not care about Russia: "Let poor bad Russians in Russia do that they want and let them do not disturb other countries." In 2008, it happens, that this just does not work. Invasion 2014.02.27 confirmed this. Now Ukrainians dig the raws along the border with Russia, to detain the Russian tanks, which are expected to attack the continental part of the country.. I doubt, if Ukrainians can detain the Russian army for a long time.

One says, Moldova will be next. Then, perhaps, Bulgaria, Palestine and Lithuania. Then, perhaps, other Europe. Then, perhaps, everywhere. We already saw this movie, I do not want to watch the remake of this scenario! Do you have another planet for me and other similar spectators, who do not want to assist such a performance? How can I write my Book in Russian, if just a presence of Russians in any country is used as a pretext for the invasion?

Well, you may interpret my activity as a selfish interest: Who will read my book in Russian, if Russia may finish within few years? So, I want the civilised countries to do something to stop maniac, who menaces others with the soviet nuclear weapon. I am neither politician, nor soldier, nor a religious bishop. I try not to interfere their job, as they should not interfere my job. But in this case, I see the sabotage, they just did not do their job: again thousands cry "Heil Putin!"; in the same way, as 70 years ago they cried "Heil Hitler!" and "Heil Stalin!".. Some of them are my colleagues and my relatives.

I do not care, what instrument use the professionals to do their job - sermons, sanctions or missiles (although I would prefer the first two options); but they should stop the maniac and keep the World. Id est, the peace. By the irony, in Russian both, peace and world are the same word, "МИР". If one claims to struggle for the "МИР", it has two opposite meanings..

As for the paslm Psalm 72:7, ".. May he come down like rain upon the mown grass, Like showers that water the earth. 7In his days may the righteous flourish, And abundance of peace till the moon is no more. 8May he also rule from sea to sea And from the River to the ends of the earth. .." it does not work in my case. I do not accept the analogy from humans (and, especially, the colleagues) to the mown grass.. Perhaps, I should use a strong example to explain this. I do not accept this analogy in the same way, as some people found beautiful the reproductive organs of plants (id est, flowers), but deny, that equally beautiful are the reproductive organs of animals and humans.

As for the "war of Armageddon" – I saw this in the horrible dream, and I even wrote it out http://samlib.ru/k/kuznecow_d_j/podgornaya.shtml (Sorry, only in Russian. Perhaps, I should make the English version..)

2014.02.24. http://www.nbcnews.com/storyline/ukraine-crisis/rice-u-s-backs-ukrainian-people-cautions-russian-involvement-n36606 TOM CURRY. U.S. Backs Ukrainian People, Cautions Russian Involvement. February 24th 2014, 12:10 am. Susan Rice said Sunday during an appearance on Meet the Press that it "would be a grave mistake" for Russian President Vladimir Putin to intervene militarily in the Ukraine crisis

2014.02.25. http://www.ibtimes.co.uk/russia-deploys-ships-troops-ukraines-crimea-raising-tensions-1437762 Vasudevan Sridharan. Ukraine Crisis: Russia Deploys Ships and Troops in Crimea. February 25, 2014 07:02 AM GMT. .. Russia is believed to be deploying military ships carrying troops in the disputed autonomous Crimea region of Ukraine, as Moscow continues to refuse to recognise the interim administration which has taken control of Kiev.// Reports suggest the movement of Russia's large landing ship Nikolai Filchenkov, with at least 200 soldiers onboard, at the Russian Black Sea Fleet's base at Sevastopol.// The ship is said to be accompanied by at least four other vessels with an unknown number of Special Forces Troops onboard, sailing from the Russian port of Anapa to the Crimean/Ukrainian Sevastopol.// Oleh Tyahnybok, leader of the nationalist Ukrainian Svoboda, said he has proof of the movement in the form of a text message.// Citing security sources in Crimea, Tyahnybok said: "I can show sms. Today at 12:00 foreseen arrival of Temryuk port in the Russian Federation in the city of Sevastopol large landing ship 'Nikolai Fil'chenkov' from the Black Sea Fleet of the Russian Federation.// "It [the ship] takes about 200 armed soldiers [and] 328 separate battalion of Marines, who are based in Temryuk and 10 BTR-80 [armoured personnel carriers]."// Russia's base in Sevastopol is already believed to shelter about 26,000 troops.

2014.02.26. http://www.thestar.com/news/canada/2014/02/25/russias_ambassador_says_moscow_wont_send_troops_to_ukraine.html Russia's ambassador says Moscow won't send troops to Ukraine. 2014.02.26. Russia's ambassador to Canada says talk about the possibility of Russian troops invading Ukraine is nonsense. Georgiy Mamedov says it's an insult to the intelligence of Canadians to even suggest that might happen in light of recent events in Kyiv. Harper government suggested that Canada could impose sanctions against Russia if it were to interfere in Ukraine.

2014.04.23. https://petitions.whitehouse.gov/petition/designate-russia-state-sponsor-terrorism/XMjbTltM WE PETITION THE OBAMA ADMINISTRATION TO: Designate Russia as "State Sponsor of Terrorism" In its unannounced war against Ukraine, Russia relies on covert operations which fall squarely within the definition of "international terrorism" under 18 U.S.C. § 2331. Specifically, armed operatives of Russia, acting under disguise, attempt to influence the policy of Ukrainian government by intimidation or coercion. They also try to affect the conduct of a government by assassinations and kidnapping, taking by force government buildings, police posts and military bases of Ukraine. This activity is being conducted on large scale and over prolonged time period, despite condemnation by the USA, G-7, NATO, EU and UN. Accordingly, Russia must be officially designated as "State sponsor of terrorism", per http://www.state.gov/j/ct/list/c14151.htm Created: Apr 23, 2014

2014.05.07. https://petitions.whitehouse.gov/petition/demand-russia-de-occupy-territories-moldova-republic-georgia-and-ukraine/Shb8HNfL WE PETITION THE OBAMA ADMINISTRATION TO: Demand Russia to de-occupy territories of Moldova, Republic of Georgia, and Ukraine To prevent ongoing occupation of Ukraine and future potential occupations of former Soviet republics, such as Belarus, Kazakhstan, Armenia, Baltic countries, and other, Russian neo-imperial military machine needs to be stopped now. We need to demand Russia to unconditionally withdraw its all armed forces from the territories of Moldova (Transnistria), Georgia (Abkhazia and Tskhinvali Region) and Ukraine (Crimea). Until complete de-occupation of all three countries (Moldova, Georgia, Ukraine) happens, total economic embargo on Russia, identical to what Iran, North Korea and other politically similar regimes are experiencing today, should by imposed by the global community. Created: May 07, 2014