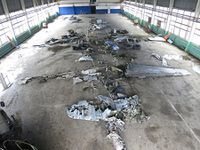 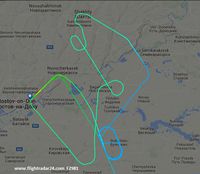 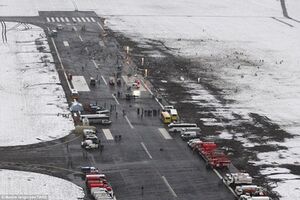 The passenger jet Boeing-737-800 of air company Flydubai, performing flight FZ981 arrived from Dubai is reported to smash into the landing strip, killing 62: all the passengers and the crew.

In the first communications the Russian officials claim that the pilots failed to land at the first attempt around 1am, then waited for 2 hours making turns above Rostov and crashed around 3am the airplane at the second landing attempt. The cause of the crash is reported to be bad weather, that caused the plane to touch the landing airstrip with its wing and to destruct. Poor quality video is supplied, that seems to be done from some commercial center outside the airport. [4][5][6].

However, this statement contradicts the video supplied [4][7].

That video shows, that luminous object quickly approaches the ground by steep trajectory; if that object is airplane, then, it seems to be already burning and, perhaps, partially decomposed.

The apparent inconsistency of the Russian official reports on the cash makes the case subject of scientific interest and causes wide discussion of the topic.

Many authors interpret this contradiction as indication on sabotage of the ground service staff and that workers ministry MHS (Министерство по чрезвычайным ситуациам). Thoese suspicions become even stronger after the morning's video, that shows the airstrip, that is reported to place of fall of the airplane. at that video, neither wreckage of the airplane (that is expected to be there, if the crash is result of the landing error, touching of the ground by the wing), nor crater, that is supposed to be there at the steep smash of the airplane at high speed.

The main official hypothesis can be summarised as follows:

(0) 2016.03.19.Accident with many causalities is result of poor weather, errors of pilots and/or some technical failure in the airplane; no sabotage takes places, and the officials who deal with the catastrophe show their good will to investigate the case and to inform the society about results of their investigation.

The hypothesis (0) above looks completely inconsistent. The observed publications can be explained within any of the following two hypothesis:

(1). 2016.03.19.Terroristic act. The airplane had been completely destroyed for the small pieces at high altitude by explosion of very heavy bomb.

(2). 2016.03.19.Stolen airplane The airplane had been just stolen, perhaps, in the plot with some of passengers, who want to escape and do not want anybody to search for them; in this case, the crash is just show, legend, inspiration for public.

Each of the hypothesis (1),(2) implies the sabotage of both, the ground service of the airport and the officials who investigate the case. Hypothesis of this sabotage appears to be in good agreement with more general concept about total corruption at all levels of the Russian administration.

Up to 2016.03.24, there are no evidences, that would allow to choose among the last two hypothesis, while the hypothesis (0) contradicts the observed publications.

Videos show neither wreckage of the crashed airplane, nor even big fragments of the airplane body [2][8].

The deep crater had been expected to be caused by the explosion shown in the first movie [7].

However, no such a crater appear in the videos made after the sunrise [2][8].

In the special video, Sergei Zaiko (Зайко Сергей Владимирович), representative of MAK (МАК, Межгосударственный Авиационный Коммитет) claims, that the fragments of the crashed Boeing are collected in the special hangar. But the video does not show the wreckage constructed from the fragments, no one seconds. Instead, during several minutes, the video demonstrates the emergency registrators, that do not seem to provide any significant information about the crash. [9].

The concept does not explain the absence of records of the on-board cameos, that were supposed to translate the video of the flight in real time to the computers in the airport and other ground service systems. These videorecords are not ever discussed by the officials. The correspondents either do not ask about this strange phenomenon, or the questions and answers are carefully censored-out from the interviews published.

In addition the hypothesis about good will of the officials, who deal with the catastrophe, does not agree with the general concept about total corruption of the Russian administration.

The in-flight destruction of the aircraft to the small pieces, distributed over a huge area, could be caused by explosion of a heavy bomb on board, or by direct hit of the aircraft by some missile of class buk, already reported to be efficient shutting-down the passenger jets. The fire on board, caused by the in–flight destruction, could appear as bright spot in the video [7].

The rest of fuel still contained in the biggest pieces, could disperse them too at the explosion at the moment of touching the ground. As these pieces were not heavy, they caused no crater at the airstrip.

Motivation of the administrators, to seem to cover the terroristic attack, may be destruction of attention of the people from the show-trial on Nadiya Savchenko, the Ukrainian hostage captured by the terrorists at the Russian invasion into Ukraine.

Vladimir Zhirinovsky indicates, that his terroristic group is highly interested to organise terroristic acts in order to kill as many civilian people as possible. [10][11].

The video is of poor quality, and it is recorded by a camera that is far from the airstrip. The bright spot and the explosion could be just firework, imitating the crash, and also result of montage of video from the camera and a computer-drawn burst.

The two hours of waiting reported could be also fake. In the case of murdering of Yury Gagarin and Vladimir Seregin (1968.03.27), the ground radar is reported to "see" their airplane during some ten minutes after the crash.

In the case Catyn-2, 2010.04.10, during a week, the dispatchers claimed, that they saw the airplane on radars, making 4 landing attempts, until 9:56 local time (or even later); then, the moment of crash had been changed to 9:41; accordingly, and the number of landing attempts had been reducer to unity. Perhaps, the signal a the radar had been emulated by the KGB ariplane Il–76. In the similar case, in order to let the robbers to drive the stollen boeing as far as possible, its signal at the radar cold be emulated by another airplane.

Concept about stollen airplane shows good agreement with absence of the high–quality records of the catastrophe.

The records of the on-board cameras of video monitoring, that were supposed to transfer the image to the ground–based servers, do not appear in the internet, and the officials avoid even to mention them.

The similar absence of the video records is observed in other cases too. The details of events 2015.02.27, when Putin killed Nemtsov, are supposed to be registered with high resolution by cameras placed on the Kremlin wall and those at the Nemtsov bridge. These videorecodrs seem to be stollen by terrorists, perhaps, the same who had organised the murder. Again, the Russian officials cannot explain why these records are not available.

Absence of the videodecords by the on-board cameras of monitoring from the on-ground servers indicates, that the crime is covered at the highest level of the Russian administration. Absence of these records seem to be one of the key questions about the case, and the officials carefully avoid the consideration; they discuss the on–board recorders instead; and these recodrers are shown to provide no information about the cause of the accident.

Hypothesis about stollen airplane shows good agreement with more general concept, that in century 21, corruption in Russia not only get wide scale, but becomes common, usual phenomenon, that characterises the life of the Russian officials.

Many authors are sure that the Boeing had been stolen, аnd actually the only imitation of catastrophe took place. [12][13][14][15]

The high–quality pictures about the crash are suggested by Dayly mail [16].

Up to March 26, there is no evidence that would allow to completely exclude, refute any of the concepts above of the 2016.03.19.Crash.

2016.03.18. https://www.youtube.com/watch?v=GHgYTV5uZgM Flydubai Boeing FZ981 CRASH In Rostov-On-Don Caught On Camera!!!!! Published on Mar 18, 2016. Plane crashes in Russia flydubai passenger boeing 737-800 from Dubai has crashed in a fireball while it attempted land Russian airport. All sixty-one people on board a flight from Dubai were killed, when their plane crashed and burst into flames as it was landing in Rostov-on-Don, in Southern Russia, on Saturday morning, a local official said. "A Boeing 737 crashed as it was coming into land. There were 61 people on board. They are all dead," said a spokesman from the local ministry, quoted by the official TASS news agency. // There were 55 passengers and six crew members on the plane, the official added. The accident happened at 0050 GMT, according to an official statement from the emergencies ministry. "The Boeing 737 on the Dubai to Rostov-on-Don route caught fire after crashing," said the statement, adding that it took an hour to bring the fire under control. The plane hit the ground a few hundred metres (yards) from the runaway as it was making its second attempt to land in poor visibility, Russian news channel LifeNews reported. // It was raining hard and a strong wind warning had been issued by the local emergencies ministry, TASS said. Emirates-based Flydubai said it was aware of an "incident" involving one of its planes, but did not give any further details. "We are aware of an incident involving our flight FZ981 from Dubai to Rostov-on-Don. We are investigating further details and will publish an update once more information is available," the airline said in a post on its Facebook page.

2016.03.19. https://www.youtube.com/watch?v=4yc9fpXsLGw RAW: FlyDubai Boeing-737 crash site in Rostov-on-Don, Russia (EMERCOM footage). May 19, 2016. Flydubai flight FZ981 has crashed in the southern Russian city of Rostov-on-Don killing all 62 passengers and crew on board. The flight was en route from Dubai and crashed during its second landing approach amid poor weather conditions.