2019.08.08.test (2019.08.08.тест) is interpretation of the 2019.08.08.explosion as success of the atmospheric test of special weapon of mass destruction, missile with nuclear engine. The "zeroth approximation" for the estimates of the main parameters of that explosion are suggested. 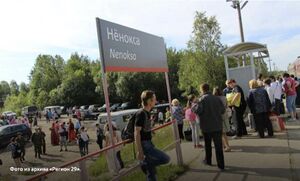 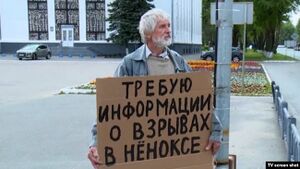 Many people discuss events 2019.08.08 near Severodvinsk, and complain about the "information vacuum"; they ask: "What happened?".
Below, I try to fill this "vacuum" with my interpretation of the event.
2019.08.16, Dmitrii Kouznetsov.

The following parameters of the explosion are estimated:

Ionizing radiation caused at the Arkhangelsk region after a week since the explosion: 1 \(\mu\)Sv/h

The estimates above are preliminary and qualitative. The numerical solving of the advection equations is necessary to adjust the estimates.
Up to 2019.08.16, no other (more precise, more accurate) estimates are found at the official publications of the Russian administration.

In vicinity of Severodvinsk, or rather, near the villages Nenoksa and Sopka, near military unit 59109, a new generation of "dirty bomb" was tested.
This bomb has its own nuclear reactor, it is used to make life-threatening isotopes directly in flight. Spreading of these isotopes is main effect and goal of this weapon.
Part of power of the reactor is used to accelerate this bomb; it can be launched as a rocket. So, It is also called a "rocket with a nuclear engine".
For the same device, the long and absurd term "Isotopic power source in a liquid propulsion system" is also used.

At the end of the mission of this bomb, it explodes, adding even more contamination. This can be performed in the following way. First, the reactor is shut down to the “iodine pit”. Then, it is put deep into a supercritical state.
Then, the strong explosion does not require a rapid assembling of pieces of a fissile material (as in a conventional nuclear bomb). This method of explosion had been tested in 1986 at the initiation of the Chernobyl disaster.

1. The device demonstrated the thrust as an engine.

2. This engine threw into the atmosphere of order of 10^14 becquerels of unstable isotopes - several orders of magnitude less than the Chernobyl disaster.

3. At the end of the experiment, 2019.08.08, 06:00 GMT (9:00 local time), near the point with coordinates 64.7, 39.2, the device exploded, releasing about 10^13 joules of energy in the form of electromagnetic radiation (radiowaves, visible, ultraviolet, X-ray and gamma), as well as neutrons, alpha and beta particles and other products of the nuclear fission. The burst of light ignited the equipment at the military unit 59109 (Вч 59109), and, in particular, the tank of the rocket fuel. The splash of ionizing radiation had been detected at a distance of tens of kilometers in Severodvinsk.

Dangerous to health and, probably, also lethal doses were also recieved by the residents of the nearest villages Nenoksa and Sopka. The test region and, in particular, aquatoria of Dvinski Bay is contaminated with unstable isotopes of iodine, ruthenium, cesium, strontium and plutonium in amount of order of 10^15 becquerel. This pollution is so great, that Russian officials keep it a secret.

The phenomena above (including the casualities) should be qualified as successful testing of the dirty bomb: Neither "Elixir of Life", nor a medicine had been tested, but the weapon of mass destruction, and since the beginning, the goal of such a device is just murder of people (and, may be, even destruction of the Human civilization).

This list is far from complete and needs to be updated on the base of information that is not yet available.

Warning. The interpretation, suggested in this article, preliminary. It should not be considered as justification of physical destruction of Sarov, nor as an appeal for terror against the persons listed above.

The estimates suggested in this article, are qualitative and preliminary. If not all radiation detectors had been destroyed at the 2019.08.08.test, then, perhaps, many people have more accurate information. They may help to adjust the estimates above.

If my estimates about the contamination are erroneous, then Russian officials have a great opportunity to refute them:
1. Publish a map of the density of ionizing radiation, at least for the Arkhangelsk region; release this map in open access.
2. Show to journalists (and readers, viewers) at least few living residents of Nenoksa and/or Sopka.

Some are added in the references below. 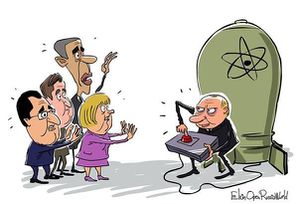 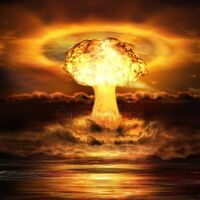 2019.08.13. https://www.youtube.com/watch?time_continue=9&v=N_N1GCw850o Radiation Containment A New Concern In Russian Nuclear Incident | Rachel Maddow | MSNBC Published on Aug 13, 2019. Rachel Maddow looks at how the story of a nuclear incident in Russia has grown steadily more alarming as new details have emerged over the course of several days, with new questions being raised about whether Russia has adequately assessed and contained any radioactive contamination that may have occurred. » Subscribe to MSNBC: http://on.msnbc.com/SubscribeTomsnbc// MSNBC delivers breaking news, in-depth analysis of politics headlines, as well as commentary and informed perspectives. Find video clips and segments from The Rachel Maddow Show, Morning Joe, Meet the Press Daily, The Beat with Ari Melber, Deadline: White House with Nicolle Wallace, Hardball, All In, Last Word, 11th Hour, and more.

2019.08.16. https://www.themoscowtimes.com/2019/08/16/exclusive-russian-doctors-say-they-werent-warned-patients-were-nuclear-accident-victims-a66896 Exclusive: Russian Doctors Say They Weren’t Warned Patients Were Nuclear Accident Victims One doctor was reportedly later found to have a radioactive isotope in their muscle tissue. By Evan Gershkovich and Pjotr Sauer. Aug. 16, 2019.

2019.08.16. https://edition.cnn.com/2019/08/15/europe/radioactive-iodine-norway-intl Norway detects radioactive iodine days after explosion in Russia. By Nathan Hodge, CNN. Updated 0733 GMT (1533 HKT) August 16, 2019. Moscow, Russia (CNN)The Norwegian Radiation and Nuclear Safety Authority on Thursday said "tiny amounts of radioactive iodine" had been detected at an air-filter station, one week after a mystery-shrouded explosion at a Russian military test range.// "Tiny amounts of radioactive iodine [have] been measured in air at our air filter station in Svanhovd in Northern Norway," the statement read." The level detected is very low and poses no harm to people nor the environment." The statement added that the sample was taken during the period of 9-12 August. ..