In Japanese, ⻌ can be pronounced しんにょう (Shinniou) and may refer to walk, to continue, to advance, to go, road.

⻌ belongs to WalkU and is easy to confuse with some other characters of this set. 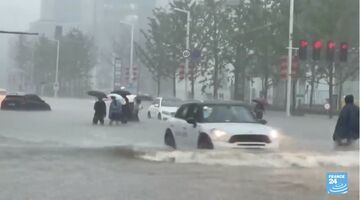 The system of names (Walk0,Walk1,Walk2,Walk3,Walk4) is based on the descriptions [2][3][6] of two of these characters by The Unicode Utilities. The similar Kanjis are numbered in the alphabetic order (order of increasing of their Unicode numbers). In word WalkU, the last letter can be interpreted as integer parameter, that can take values 0,1,2,3 or 4.

Characters of WalkU have similar pictures, similar pronunciation (Shinniou, しんにょう) and similar meaning (walk, advance, go on, proceed). For this reason, the linguists do not consider this confusion as a serious problem. Lack of knowledge of these confusion does not affect the exams. The manuals and dictionaries of Japanese do not mention the multitude of ways of encoding of a "well-know" character.

However, the mistakes appear, when one search for the character in databases, or in some document, or tries to replace it through the text, or use the character in the name of a manuscript and then cannot find the file. The problem is not specific for Japanese, and it is so grave, that some authors use only the ascii characters in filenames [7].

The goal of this article is to reveal the confusions with the encoding, in order to avoid mistakes with the similar characters, or, at least, simplify the revealing and the handling, the correction.

Term WalkU is defined to substitute this (long and difficult to remember) construction with single word.

Character ⻌ by itself is not so popular in Japanese, but its image is used in images of other, more complicated canjies. Here are some examples:

The characters above are complicated; they are enlarged in order to allow the visual recognition.
(Over-vice, all of them would look similar to character X2592 ▒.)

Wikipedia [16] suggests notation Radical 162 only for one kanji, namely 辵; as for ⻍, ⻌, or ⻎, they are qualified as "transforms".

The default media wiki setting does not allow to make difference between terms Radical 162 and radical 162.
In addition, the confusion may occur with term RADICAL 162, as some operational systems confuse the lowercase letters and the uppercase ones, while these letters appear in the filenames.

In such a way, term Radical 162, by itself, is confusing; it is difficult to determine, which Unicode characters are qualified as Radical 162 and which do not belong to this set.

Character ⻌ is highly ambiguous; it is not allowed in Tarja.

Character ⻌ can be translated from Japanese into Tarja in the following ways:

None of these words looks similar to other words of Tarja.

Up to year 2021, there is not enough information collected to make preference in factor of transliteration Shinniou, Shinnyou, Shinnyuu. While, all the three ascii transliterations are kept.