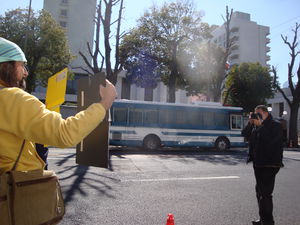 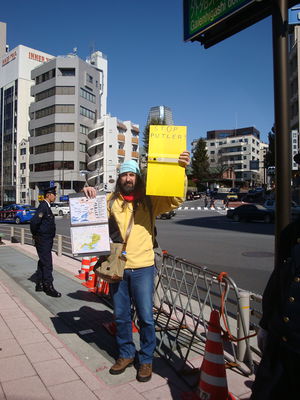 The event begun soon after 13h and lasted of order of 1 hour. The following images were exposed:

The following text had been distributed and dropped into the mailbox of the Embassy:

I work at Japan and mainly for Japan, but I am still Russian citizen, and I feel myself responsible for the things that happen in Russia and around of Russia. Now, it is already scientific fact, that the results of elections in Russia are altered; so, neither the Russian President, not the Russian parliament represent the wills and wishes of population of Russia. I am not sure, if the diplomatic administrations do realise this, and do realise the sequences this may have for all the countries. %This motivates me to communicate you. I do not think that your country is an exception.

My business in life has been for the past 10 years to elaborate the universal criteria to evaluate, appreciate efforts and achievements of any mankind, irrespective of their field of research, race, citizenship or religion. And I feel, now is time to apply my criteria to the recent events. I mean the Russian invasion into Ukraine, that happens since 2014.02.27.

After the Russian-Georgian war of 2008, I see similarities between the Russian government (handled by Vladimir Putin) and the German one in 1938-1941 (handled by Adolf Hitler). With time, the analogy becomes deeper: claims to defend the nation (outside the country), glorification of Fuhrer, military enthusiasm, invasions to the neighbour countries, apathy of the Western countries with respect to the new and new occupations and the annexations..

Any neighbour country may happen to be a next victim. The aggressor will never stop by himself. Could you consider, please, to cooperate with other colleagues, in order to stop Putin now?

I know, that it is not so much, that personally you can do now to stop Putin. But I still think, that you should try. Then, at the end of your life (unfortunately, soon or late, this end will come), you'll be able to say to God: "I wanted to stop the new Hitler, but the only I could do, was .. . May be, it is not so much done, but it has been done by me."

I sent similar letters to Ambassadors of Russia, Romania, Bulgaria, Georgia, Ukraine, Turkey and Poland, because I still hope, the international cooperation can stop the aggressor. Feel free to communicate me, if you have any doubts or questions with respect to my letter.