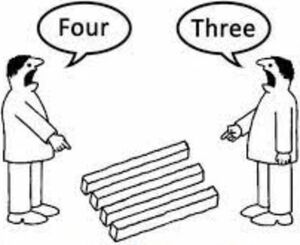 Confusion is state of analysis of some object or phenomenon, characterized in that, that some concepts, believed to have some common range of applicability, contradict each other.

Often, confusion is caused by using of ambiguous words, terms, images. Below, several examples are suggested. 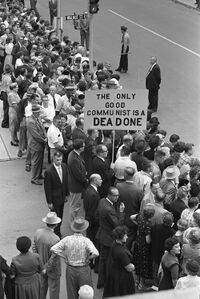 The most disputed term with at least two opposite meanings is Communism.

In the first meaning, Communism refers to the prudent, prosper society, that does not need money at regulation of distribution and consumption of goods, as all the material needs of all member of the society are satisfied due to abundance of goods of all kinds.. In such a way, term communism is defined in the 1961.ProgramKPSS

In the second meaning, Communism denotes the fascistic structure of society, with single political party, with strong censorship, propaganda, suppression, punishment and murdering of authors, that express doubts in the official historical concepts, heavy exploitation of working people by the offee and practical prohibition for the citizen to leave from the country (slavery). Such a society is constructed by terrorists, criminals, who had pretended to build-up the Communism in the first meaning of this term.

In addition, term Communism as Sovetism denotes the Religion, that postulates construction of Communism (in the First meaning) in the USSR at the second half of century 20.

Term Socialism allows the similar ambiguity. A "socialistic" country is characterized with high social inequality; the socialistic officials have castles, personal yates, airplanes, and collects tons of gold, while the incomes of working people are for many order of magnitude smaller.

Some Russian characters, in particular, Ё,ё,Й,й, can be encoded in various ways. The automatic redirects, replacements may worse the case.

The confusion is especially heavy, if these characters appear in the filenames or in the names of articles. While no simple way to resolve the problem is reported, it may have sense to avoid this characters in titles of articles: the misprints are not seen, but are revealed at the attempts to recover the files, saved with a backup, or at the search for an article by its title.

Confusions appear in believe, that encoding of a Kanji character does not matter.

For example, if the vehicle license plate is registered in the database as

(or appear in this way in some text), then, the search for

may fail to find it.

Hope, the programmers in Japanese police know the tricks with encoding, and their search engines handle well various encodings of characters.

Then, situation with different encoring of similar characters can be qualified as a confusion.

Some Unicode characters have no established pictures.

Especially this applies to characters with numbers greater than XFFFF.

Character X1F97E 🥾 appears with Linux as a boot with almost horizontal bottom part: 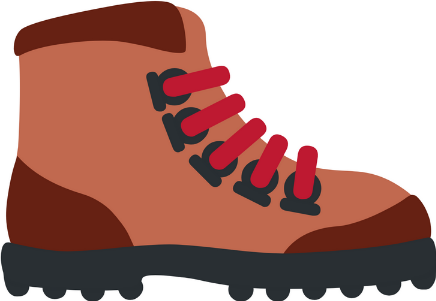 At Macintosh, it looks inclined and, in addition, the bottom seems to be well bended, as the boot is already worn-out: 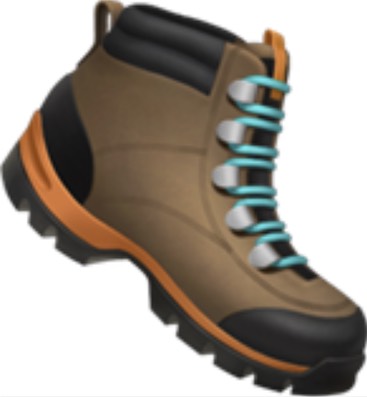 The bottom of the boot should be colored as combination of orange and black, as in is in character 🥾

cause confusions: user of Macintosh consider it as reasonable explanation, while those, who each the statement from Linux may find it contradictive.

The boot whoild be placed horizontally, as in is shown in character 🥾 also causes condition; users of Macintosh found it self-contradictory.

Characters that change their shape, dependently on computer, cause confusions; they should be avoided in scientific research.

In some other operational system, the highest Unicode characters may be even more tricky.

This confusion seems to be used by the Russian offees: the corruption takes a loan from the State bank in amount of one trillion rubles, assuming, that it is 10^18 rubles; and return trillion (with some presents) assuming, that it is 10^12 rubles. Such a trick (or similar tricks) seem to be popular in the Russian administration of century 21: in the budget, there are no money for the social needs, while the officials in their secret places collect tons of dollars.

Sometimes, the use of confusive terms is unavoidable; for example, at typing in Chinese or in Japanese; usually, it is difficult to specify each time, are the used characters belong to KanjiRadical, KanjiLiberal or KanjiConfudal set.

In other cases, use of ambiguous term (for example, "trillion", "communism", etc.) indicates either poor writing skills of the Author, or his/her bad will, attempt to cause confusions, quarrels, conflicts, wars.

https://en.wikipedia.org/wiki/Confusion_(disambiguation) Confusion is the state of being bewildered or unclear in one's mind about something. Confusion or Confused may also refer to: Confusion and diffusion, a technical concept in cryptography