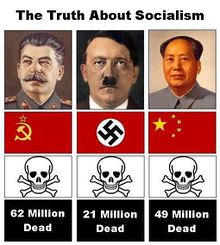 The truth about socialism by [1]

1. Usually, socialism reefs to the social system with centralized slavery realized in century 20 in the USSR, Cuba, North Korea and some other countries. Such countries are qualified as "socialistic".

2. Term Socialism may have also opposite meaning, as orientation of the society and the administration to the solving of the social problems of the population [2].

The mixed use of the term in the two meanings above causes confusions. [3]

National socialism (nazism) is ideology, religion and practice, that postulate the superiority of some nation, rase, ethnicity above other nations, culture. It is assumed, that namely the superior rasa should handle the country and, even more, the whole world.

The nazi idea may look very attractive at the beginning. These idea can be used for consolidation of nation, recovery of the industry, establishment of certain order, etc. Before the World War II the roads and the industry in Germany were reported to be very good.

National socialism is qualified as sort of fascism, as any methods are allowed for the superior nation in the struggle ("Kampf") against the enemy nations.

Extermination of the critical part of the society does not allow the Fuhrer to make wise decision, that, finally, leads to the terror, genocide against population of country of national socialism, support of terrorism in other countries, acts of explicit aggression agains neighbours and sometimes even to the world–wide war (World War II)

International socialism bolshevism is ideology, religion and practice, that postulate the superiority of certain concept, namely, concept of centralised government of all the society and extermination of all people who do not support this idea.

International socialism declares the dictatorship of some specific class, "proletariat", and assumes, that this is in interests of the people; at least, in the interests of majority ("Bolshinstvo") of the people.

Practically, bolshevism leads to monarchy, dictatorship of a single person, gensek, and conversion of all the society into slaves. In some socialistic countries, even the free exit from the country is prohibited and is qualified as heavy crime.

International socialism (bolshevism) is qualified as sort of fascism, as any methods are allowed for the superior nation in the struggle against the enemy classes and any individuals, who express doubts in the ideas of bolshevism.

Extermination of the critical part of the society does not allow the Gensek to make wise solution, that, finally, leads to the terror, genocide against population of country of international socialism, support of terrorism in other countries, acts of explicit aggression agains neighbours and sometimes even to the world–wide war (World War II)

All the ideologies of socialism, initially, assume, that socialism leads to some utopia, some strong, prosper and healthy society.

Socialistic ideas can be traced in various countries thrush centuries.

As all other utopias, idea of socialism refers to horror and barbarian, as soon as they are interpreted as a primary goal that allow all methods for the realisation: The pretext of meet to struggle against enemies is used by the leaders to exterminate the political opponents and to raise censorship and propaganda. The propaganda justifies heavy crimes of the fuhrer, leader, gensek and his friends. (Usually, in the fascistic countries, the fuhrer is male.)

In TORI, the utopia of socialism is represented with novel Orwell1984. Some links about attempts of recovery of socialism in Russia of century 21 are collected in article back in the USSR.

Support of various social groups is important for civilised countries, it is necessary for the efficient solution of scientific, technological, ethical and other problems that are unavoidably raised in any society at the development.

The idea of socialism and term socialism are finally discredited by the use in the USSR in 1917–1990, in Germany in 1935–1945, in Notrh Korea in 1945–2016, and in other countries. Up to year 2016, in China, the top Fuhred is called "general secretary", gensek, and membership in the communistic party is import and bureaucratic attribute that allows the researcher to make scientific investigation, getting the governmental support for this activity. Up to century 21, the hereditary succession of title Gensek is observed in the North Korea.

The phenomena mentioned above form the strong reason to avoid term "socialism" specifying a civilised democratic society what care about all social troops of citizen and guests. The appropriate term and its definition still should be elaborated.