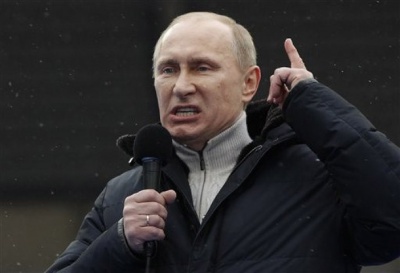 Many authors indicate that Putin is the KGB agent, who took the superior power in Russia in the beginning of century 21; many negative observation (degradation of science to the perpetual motion machines like gravitsapa, terroristic acts, decrease of population) are attributed to the corrupted ministers and administrators promoted by Putin. Putin is believed to be plagiarist, his Ph.D.Thesis is reported to be fake [1][2].

In connection of the riot against Muammar Gaddafi, and especially after his death the suggestions that Putin may have similar end of his career are expressed [3][4]. Such a concern is based on the terroristic activity of KGB and edro ("Edinaya Rossia"), total corruption in the highest level of the administration, suppression of critics and falsifications at the presidential election. The intent of the tandem to keep the superior power forever is discussed in the internet; sometimes, the revolution is considered as the only way to change the ruling party. 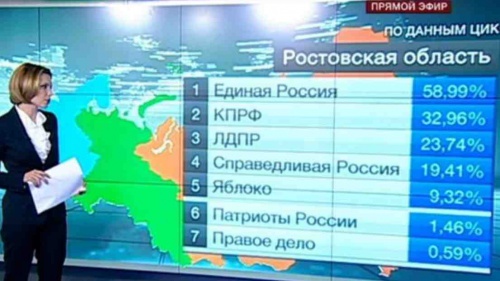 At the announcement of the preliminary results of the 2011.12.04.Election, it happened, that in some regions, the total sum of votes greatly exceeds the 100% of the total number of the electors. Up to 46% of votes seem to be just fake. For these reasons, the results are qualified as falsification. Such a fraud caused the world-wide protest action in 2011.12.10 with many anti–Putin slogans. After such a wide protest, December 15, Putin had declared that he considers to leave from the government if he does not feel the support of the people. [6]. In order to show that he has no more support of the people, the protest actions are organized in Moscow December 17 and December 24 [7][8][9].

Putin tries to participate as candidat at the Presidential election in 2011.03.03; it is indicated that such a participation is illegal [10], contradicting the Law about the Presidential Election. The application of the denouncement of the Putin;s registration is submitted to the Superior Court of Russia. See the special article Переуступка (In Russian) on this subject. It is indicated that 6 violation of Law are committed at the registration of Putin as a candidate for the 2012.03.04.Election of president of Russia. These violations are analysed at the site Antiputin [11].

The election fraud in favor of Putin and his party is confirmed by the statistical analysis of the officially reported results[12]. It is shown, that the hypothesis of the honest election in Russia can be rejected at high significance level. The assumption of the huge election fraud is necessary for the description of the experimental data. The model of the election fraud had been suggested by Peter Klimek, Yuri Yegorov, Rudolf Hanel, and Stefan Thurner in 2012 [13]. The three parameters are introduced: for incremental fraud $f_{\mathrm i}$, the extreme fraud $f_{\mathrm e}$ and the deliberate wrong-counting $\alpha$. With these parameters, the good agreement of the model with the observed statistical properties is reported. Data for elections in Austria, Canada, Czech Republic, Finland, Spain, Switzerland, Poland, France, Romania, Russia, and Uganda have been analyzed. For the two last countries, the modeling of the election fraud is essential for the description of the announced results; the model shows good agreement with the observed data. Ruben Enikolopov, Vasily Korovkin, Maria Petrova, Konstantin Sonin and Alexei Zakharov have evaluated the lower estimate of amount of the fake votes at the 2011.12.04.Election to be at least 11 percentage points lower than the official count (36% instead of 47%) [14]. Up to year 2012, no alternative description (without the election fraud) of the observed peculiarities in the distribution of votes has been suggested. In this sense, the massive election fraud in Uganda and Russia can be considered as scientific fact. 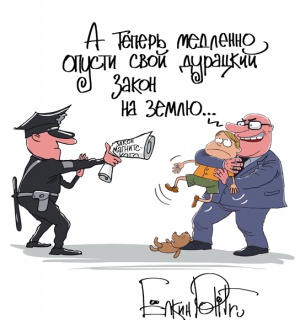 And now, slowly put your idiotic bill down to the ground [15] 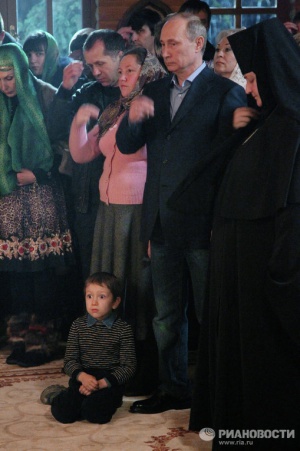 Many evidences of the terroristic activity of Putin and his commandos are available in the internet [17][18][19][20][21]. Some episodes are collected in the articles Nevsky Express bombing (2009) and Katyn-2.

Due to his terroristic activity, Putin is considered as a treat to the global piece [22].

According to the statement by V.Churov [23], V.Putin is not at the governmental service; he may be arrested for terrorism as soon as he leaves from the Russian Federation and interrogated as soon as he appears at the USA. The statements by the Russian militaries and navies [24][25] indicate that nobody will combat for him nor for his party edro: Putin has no support among the Russian officers, although he has support in the KGB, the Russian Elective Committee and his party edro. Namely these three groups of people are represented by him. This aspect of the Putin's position for years 2011–2012 is mentioned in the article Putin versus Clinton.

Putin is considered as initiator and leader of the Herod Law; he signed that bill 2012.12.28 [26]. Putin had declared that bill as a response to the Magnitsly bill, in order to affect the administration of the USA and the European countries. The bill prohibits the Russian orphans to be adopted in the American families, even if the children already know families who will to adopt them. Such a low makes the Russian orphans to be hostages. All the senators who voted for that bill and Putin who signed that bill are qualified as terrorists, according to definition of that term.

In 2011– 2012, especially after the fraud at the 2011.12.04.Election, may Russians declare that the Putin politics of terror, corruption, bribery is not acceptable for Russia and Putin should leave [27].

Due to the total corruption in Russia, [28], and in particular, the election committees, the dismissal of Putin with election is not difficult: at each stage of the election procedure, some ten percent in favor of Putin or his party edro are added, so, the"official" results of the elections do not represent the will of the electors.

The petition against Putin is distributed [29]. For the beginning of 2012, hundreds have signed that petition. The arrest of Putin should be simplified by the discovery that he is not at the governmental service; so, in principle, he could be arrested in a way, similar to that Victor But was arrested. The text of the petition (In Russian) in the state for 2011 March 21 is copypasted from http://putinapodsud.org/en below

FOr 2012 March, the site http://putinapodsud.org/en does not provide the English version of the petition; so, it may be considered as a draft rather than an official application.

After the election frauds (2011.12.04.Election and 2012.03.04.Election, and especially after the "Bloody sunday" 2012.05.06 (when many protesters were beaten and arrested by the police) the Russians consider Putin as betrayer, robber, criminal, killer, terrorist. For his inauguration 2011.05.07, the center of Moscow was emptied; Putin gone to Kremlin by the dead, empty city [30]

The scenario of the Pussy Riot trial is believed to be approved at the level of Kiril Gundiaev and Vladimir Putin. The tight collaboration of the state administration with that of church in the punishment of protesters is qualified as inquisition [31].

The DAILY MAIL REPORTER writes, that Putin buys some villa in Spain for £15m [32].