Difference between revisions of "⽅"

⽅ (X2F45) is easy to confuse with KanjiLiberal 方 (X65B9); some software use similar pictures for these two characters.

The two characters look similar. Some programming is required to avoid confusion.
Encoding of characters ⽅ and 方 can be revealed with program du.t
File uni.t also may be required (and in such a case should be loaded). Then, command 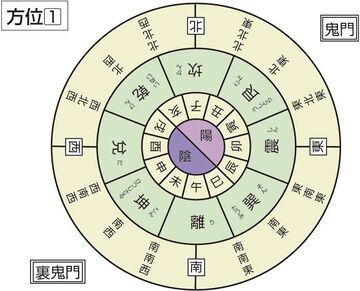 ⽅ may refer to direction at the surface of the Earth or at a geographic map: 北, 西,東, 南.

Usually, the map is oriented in such a way, that the north (北) is at the top, and South (南) is at the bottom.

方 appears in the following combinations:

These expressions have similar meaning (fig.1); for this reason, this meaning is attributed to the first (ant common) character in these expressions.

The confusive similarity of characters X2F45 ⽅ and X65B9 方 may cause mistakes: in some cases, the two characters are treated as the same, and in some cases as different.

In cases of such a confusion, the ascii names X2F45 and X65B9 can be used instead of KanjiRadical ⽅ and KanjiLiberal 方.