1964.10.16.Test is explosion of the nuclear device at desert of Xinjiang, China.

Roughly, the 1964.10.16.Test had been performed at the east side of the Kaklamakan Desert and North-Sest side of the Gobi desert, in vicinity of the dried lake Lop Mur.

In the literature, position of the explosion is not well established. For the coordinates, the following estimates are observed:

There is also satellite picture of the place of explosion by the nuclearweaponarchive [5], see last map at right. The specification reads: Lop Nur Nuclear Test Range four days after the test of "596". Image taken by a KH-4 Corona intelligence satellite.

However it is difficult to identify the place shown at the image [5] with any of the maps above.

1964.10.16.Test is followed by many other nuclear explosions in that region.

The New York Times indicates, that "China conducted 45 nuclear tests at its remote Lop Nur site in the western region of Xinjiang, including 23 in the atmosphere, from 1964 until it signed the Comprehensive Nuclear Test Ban Treaty in 1996." [9]

The area of testing is contaminated with unstable isotopes, affecting the population. Jun Takada estimates, that off order of million people in the nearby areas received doses high enough to induce leukemia, solid cancers and fetal damage. Hundreds thousand people are believed to die of these illness. [10]

The mark used to navigate pilots is seen at the maps of century 21: 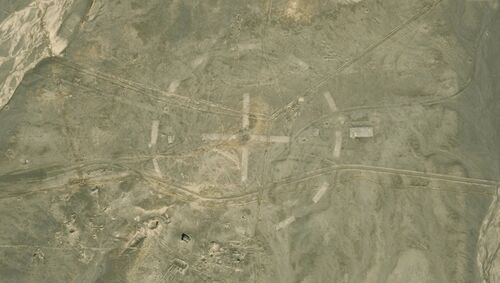 The dashed circle drown at the ground has diameter approximately 300 meter.