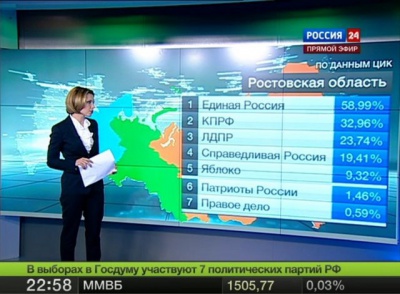 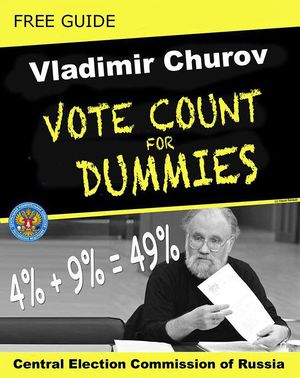 Cartoon indicating that the only 4 among 49 percent for edro are honest, and other 46% are fake

2011.12.04.Election (2011.12.04.Выборы) to the Russian Parliament is believed to be big fraud of the ruling party edro, which finally was announced to get about 49% of votes. Many sites indicate that the falsification (alteration) of the results took place at all stages of the election process –since the registration of candidates and the electorate till the counting of the ballots and representation of the results. Ruben Enikolopov, Vasily Korovkin, Maria Petrova, Konstantin Sonin and Alexei Zakharov have evaluated the lower estimate of amount of the fake votes to be at least 11 percentage points lower than the official count (36% instead of 47%) [2].

Fraud at all levels

The frauds were reported at all levels of the election, since the registration of parties until the fake ballots and fake protocols.

At some local committee, not only observers, but even electors were not allowed to enter[3].

The fraud is so evident, that many Russian citizen think that the announced results do not represent the will of the electorate at all; the most of ballots in favor of the ruling party (edro) seem to be just fake [4]. Some of references on the topic are collected also in the article 2011.12.04.election/chronology.

Scale of the fraud

Among the evidences of the large-scale fraud, the easiest to verify is the result of the preliminary count of votes. While not all ballots were counted, the total amount of votes is supposed to be smaller than 100%, but in several regions it happened to be significantly larger than 100%. In particular, for the Rostov region, the Churov's functionaries reported 146% of votes in total. This is considered as an evidence, that of order of 46% of fake ballots were dropped by the falsifiers in favor of the ruling party. It would not be possible to provide such a huge fraud without the centralized approval; so, one may expect, that the similar persentage of the fake ballots were added in other regions too. This indicates that at the honest election, the edro would count with only 4% of votes instead of 49% reported as the result of the election. This gave hint to the cartoon, where Vladimir Churov proposes the new arithmetics for idiots: from the pessimistic estimate 4% and the more "optimistic" estimate 9%, he makes for the edro the resulting estimate of 49% votes reported.

There are also other estimates suggested, that the only from 20 to 25 percent among the resulting 49 edro's percents are fake [5]. December 5, Dmitrii Medvedev considered the violation of Law at the parliamentary election as no major fraud [6]. Later, December 11, 2011, after to see the worldwide protests against the intents to legalize the break of the elementary rules of arithmetics, Medvedev promised to organize the investigation of the fraud at the election [7]. Several authors consider the statement by Medvedev as a funny joke, because in the same message Medvedev had declared:"I do not agree with any slogans or statements made at the rallies.", while the frequent slogan at the Rallies demands nothing more but "the honest election for Russia".

Databases of the frauds

There exist also other similar sites [9][10] but they are only in Russian (do not provide the English version).

The published data allows to reveal some part of the robbery of votes at the last stage of the election; the statistical analysis indicates that many millions of ballots were stolen in order to alter the results in favor of edro. Many evidences indicate to the same point: the election fraud by the edros functionaries and form the strong case [11].

The obvious fraud at the election caused many protests. In Russia, many meetings for the honest elections were suppressed, of order of 103 protesters were arrested.

The big protest took place 2011.12.10. The wave of demonstrations, pickets and meetings of protests began at Japan and Australia, and, following the daylight, rounded the Earth, finishing at the USA and Canada.

The protesters insist on the release the previously arrested protesters, denunciation of the election fraud, dismission of Vladimir Churov, investigation and punishment of the frauders and the organization of new, honest parliamentary election.

Of order of 105 protesters are reported to assist the meeting at Moscow 2011.12.10. The actual amount is difficult to evaluate, because the "Bolotnaya ploschad" assigned for the meeting by the officials of Moscow happened to be too small for such a huge amount of people; the large region of Moscow was covered with Citizen who had expressed very critical opinions about the honesty of the election, about the head of the Central Election Committee Vladimir Churov, about the ruling party edro and their leader Vladimir Putin. Protesters demanded to denounce the result the election as fake, and to dismiss Vladimir Churov who is believed to organize the fraud and to coordinate the falsifiers.

Meetings at other cities were less numerous compared to that in Moscow, they counted from few participants to few thousand. The links about protests in 142 cities are collected as the interactive map [12]; new reports about minor pickets at the Russian embassies in various countries are still added.

Due to the internet connection, some of slogans and banners were used at several meetings. Many meetings at foreign countries were located in vicinity of the Russian embassies. The protesters used to stress, that their action is not against the police, and not against the employee of the Embassy, but against the fraud and for the honest election. The description of the protest meeting at Tokyo is available in TORI in the article 2011.12.10 meeting at Tokyo.

Even bigger protests took place 2011.12.24. The meeting at Moscow was authorized by the city administration. [13]. The number of participants is estimated from 30 thousand (the "Churov's estimate") to 140 thousand (the organizer's estimate). In TORI, there is special article 2011.12.24.Митинг (in Russian) about that event. The claims about denouncing of the result of the election, removal of Vladimir Putin, Vladimir Churov and other impostors are formulated in the sharp form.

Critics of the organization of the election

The observers indicate that the severe violations Law took place since the beginning of the election [14].

The head of the Central electoral commission Vladimir Churov is believed to be one of organizers of the falsification; the dismission is requested [15][16][17][18]. The protesters around the world indicate that the results of the election 2011.12.04 should be qualified as fake and annulled; the elections should be repeated in a honest, prudent way [19][20].

The simple and evident observations of the fraud are supported also with the statistical analysis of the published data[11].