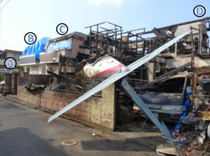 Tail part of the airplane crashed [1] 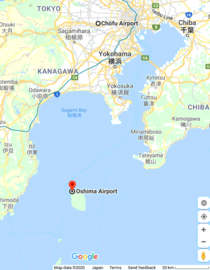 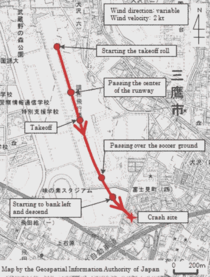 Few strange details from the original reports [2][1] about that crash are mentioned below.

The report [1] suggests the following summary:

On Sunday, July 26, 2015, at around 10:58 Japan Standard Time (JST: UTC + 9hrs:unless otherwise stated, all times are indicated in JST using the 24-hour clock), a privately owned Piper PA-46-350P, registered JA4060, crashed into a private houseat Fujimi Town in Chofu City, right after its takeoff from Runway 17 of Chofu Airport. There were five people on board, consisting of a captain and four passengers.
The captain and one passenger died and three passengers were seriously injured. In addition, one resident died and two residents had minor injuries.The aircraft was destroyed and a fire broke out. The house where the aircraft had crashed into were consumed in a fire and neighboring houses sustained damage due to the fire and other factors.

The destination was Oshima Airport. 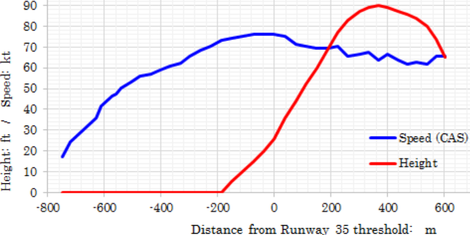 Figures as left show reconstruction of trajectory of the aircraft before the crash, images are from the same report [1].

The red curves shows altitude of the aircraft versus time (JST) and versus distance from the runway threshold. Following the old tradition (established before discovery of the rotational symmetry of the space), the length is measured in meters, while altitude is measured in foots.

Figure 1.16.5.4, at page 60 of the same report, indicates that, approxmately at this moment, namely, at 10:57:50, the landing gear is retrtacted. Perhaps, the retracting of the landing gear takes of order of 5 second; so, the deviation of 5 seconds is not significant.

Then, the aircraft seems to loss the control; the pitch and speed become chaotic. The shaking leads to loss of speed, and the aircraft falls down to the living blocks. In the report, the coincidence of the retracting gear and loss of the control is not discussed.

In the next section, this coincidence is discussed; the lost of control is interpreted as result of some defect or mechanism that is switched on at the retraction of the landing gear. 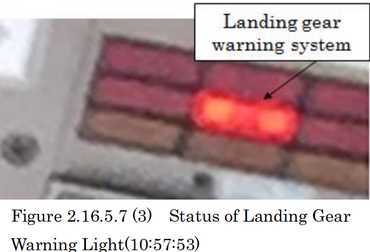 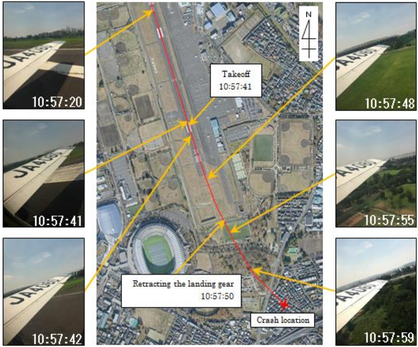 The problem of the aircraft appears at the retracting of the landing gear.

The figures indicate, that, after an attempt to retract the landing gear, the aircraft losses its performance; both speed and pitch become incontrolable. In addition, the averaged speed, instead of to increase (due to reduction of the aerodynamic drag of the wheel), reduces.

Figure 2.16.5.7(3) at page 63 confirm, that the landing gear was not successfully retracted at least until 10:57:53. (After the retraction of the landing gear, the lighting of the gear indication is supposed to be off.)

At this moment, the aircraft gets out of control, losing both speed and altitude.

The coincidence above could be interpreted with hypothesis, that some object happened in the place, where the wheels of the aircraft are supposed to be packed. The squeezing had affected the cables from the cabin to the tail, and leaded to the lost of control.

Perhaps, the Captain tried to regain the control, accelerating the aircraft in various directions, but the reserve of speed and altitude was not sufficient.
Perhaps, there was no sufficient time to release the landing gear back, in order to regain the control of the aircraft. That would allow to perform the emergency landing at the same airstrip, or even to continue flight with landing gear released, until the amount of fuel reduces, and speed and altitude increase sufficiently for the safe retraction of the landing gear and the stable flight.

Perhaps, at the heavy load and displacement of center of mass behind the optimum, the aircraft (and lives) still can be saved, delaying the retraction of the landing gear for a minute, until the aircraft gets sufficient speed and altitude.

Perhaps, the Captain tried to regain the control, accelerating the aircraft in various directions, but the reserve of speed and altitude were not sufficient.

Perhaps, at the uncontrollable "nose-up", the aircraft and lives can be saved, if the Captain ask the back seat passengers to move forward, at least for one or two meters.

These hypotheses could be checked (verified of refuted) by the sportive pilots, performing the manoevres with heavy load, "center mass behind the optimum", with releasing and retracting of the landing gears and "noise-up" at the altitude, sufficient for the recovery to the safe flight conditions.

The hypothesis above differs from the interpretation in figure 3.5.3 of the Report. According to that figure, the aircraft took-off a hundred meters before the optimal position (and before it got the speed sufficient for the safe launch), and this is interpreted as one of the main causes of the accident.

The hypothesis in this section is provoked by some questions that arise at the reading of the English version of the Report. These questions are mentioned below in the special section.

The English version of Report [1] causes questions. The primitive (and, perhaps, not appropriate) attempt to clarify them is presented above in section "Conspirology". However, suth a "conspirology" helps to formulate the questions in sharp form below:

1. According to the Report, for a flight for a distance of order of 100km, the fuel had been loaded in amount, sufficient for a flight to a distance more than 1000 km.
Is it normal practice, to load fuel in amount of an order of magnitude larger, than necessary for the flight?
Is such a practice usual in the world-wide small aviation?
In Japan?
At the Chofu Airport?

3. Fluctuations of speed with frequency of order of 1 Hz are seen in figure 2.16.5.3-3.
Amplitude of these fluctuations is of order of 4 ft/sec.
This corresponds to acceleration
\( 2 \pi \times 1 \mathrm{Hz} \times 4 \times 30.48 \mathrm{cm}/\mathrm{s} \approx 7.7 \mathrm{m/s^2} \approx 0.8 g \),
were \( g\approx 9.8 \mathrm{m/s^2} \) is the free-fall acceleration.
Such an acceleration is supposed to cause strong discomfort of the passengers.
(It is of order of acceleration at the emergency braking of a car.)
The post hoc statements of the survivors do not indicate, that they felt this discomfort during last 10 seconds of the flight.
Why the Report does not mention this disagreement?

4. The cause of the strong fluctuations of the speed is not revealed.
Is the rotation speed and inertion of the propeller sufficient to allow short acceleration and decceleration with amplitude of order of \(g\)?
Could the strong fluctuations of speed and pitch be result of attempts of the Captain to regain the control, to push out some garbage, that could block the cables to the elevators at the retraction of the landing gear?

6. Could the loss of stability of the aircraft and the left turn be caused by the failure at the retcraction of the left landing gear?

8. Do the questions above address only to the English version, or they can be applied to the Japanese original too?

This article should not be interpreted as an attempt to teach pilots, how to fly an overloaded airplane with center of mass behind the optimal position.

Nor it is attempt to teach investigators, how should they analyze the accident and how to write reports on accidents.

This article represents an attempt to understand their explanations and to rewrite them in a form, understandable for non-professionals.

Pressurization adds tremendous capability and flexibility to your flight operations as you top weather that other piston singles are struggling to get around. With the Piper Mirage, the ability to fly above the weather in pressurized comfort need not be cost prohibitive.
As you equip and price your Piper Mirage using the specifications below, do so with the knowledge that every dollar you spend takes you to a higher level of speed, comfort and capability.
SPECIFICATIONS - Piper Mirage Piper PA-46-350P
Max Cruising Speed: 213 ktas (395 km/h)
Range with 45 Minute Reserve 1,343 nm (2,491 km)
Standard Useful Load 1,212 lbs (549 kg)
Number of Seats Six (6)
Maximum Approved Altitude 25,000 ft (7,620 m)
Engine Lycoming Dual Turbocharged TIO-540-AE2A, 350 hp
Wing Span 43 ft (13.1 m)
Length 28.9 ft (8.8 m)
Height 11.3 ft (3.4 m)
Cabin Length 148 in (375.9 cm)