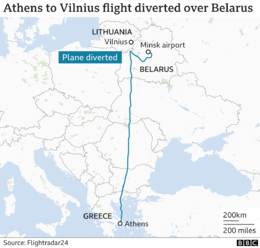 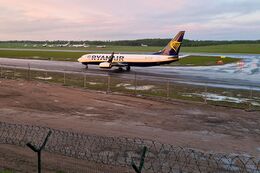 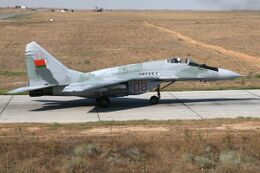 The terrorists menaced pilots of Boeing 737-8AS with bomb. It was claimed to be already on board and to explode at the attempt to land at the airport of destination. The terrorists recommended the pilot to land at Minsk.

The pilots did not seem to follow the "recommendation"; then the terrorists sent the military jet fighter Mig-29 to intercept the liner.

The military pilot could have order to shout the liner if any disobedience; so, the civil pilots were forced to land the passenger aircraft at Minsk airport.

Many authors recognize the 2021.05.23.hijack as piracy, milirary attack on civil aircraft, terroristic act, organized by the Belarusian authorities. Belarus is qualified as state terrorist [1][5][6].

Between 09.30 and 09.44, the terrorists alert the pilots that they have loaded into the airplane the bomb, that will be activated, if the airplane lands at the airport of destination. [7]

The pilots express doubts in the statement about bomb.

The terrorists send Mig-29 to intercept the airplane and, perhaps, to shout it, if the pilots disobey the "recommenration" to deviate from their way.

2021.05.23,09:44 AM UTC, in a dozen km from the border between Belarus and Lithuania, interception by the Mig-29, forced to U-turn, back into airspace of Belarus. The pilot of the Mif-29 is believed to have permission to shoot down the passenger aircraft. [8]

The crew, the passengers and their luggage are captured by the terrorists. The luggage is inspected with pretext of searching for a bomb. The bomb is reported to be "not found". Apparently, the terrorists have stolen, withdrawn and hiden the bomb that was supposed to destroy the aircraft at Vilnius, if the pilots disobey the "recommendation" to land as Mink.

The Reuter suggests the digitalization of conversation between the pilot of hijacked airplane and the terrorists [2]:

Controller: For your information, we have information from special services that you have bomb on board and it can be activated over Vilnius.

Pilot: Ok, could you repeat the message?

Controller: I say again, we have information from special services that you have bomb on board. That bomb can be activated over Vilnius.

Controller: For security reason we recommend you to land at UMMS. (ICAO code for Minsk airport)

Pilot: Ok...that..it..understood give us alternate please.

Pilot: The bomb....direct message, where did it come from? Where did you have information about it from?

ATC: This e-mail was shared to several airports.

Controller: This is our recommendations.

Pilot: Can you say again?

Controller: This is our recommendations.

Pilot: Did you say that your recommendation?

PILOT AGREES TO LAND IN MINSK

Pilot: I need answer the question: what is the code of the (unreadable) green, yellow or amber, red.

Controller: They say code is red.

Pilot: Roger that, in that case we request holding at present position.

Controller: Roger, hold over your position, maintain FL390 turns at own discretion.

The goal of the terrorists could be kidnapping of Roman Protasevich and Sofia Sapega [10].

The terrorists menaced the pilots of FR4978 with bomb (that was supposed to be already on board of the passenger liner) and with military aircraft Mig-29. That fighter intercepted the liner and could shoot it, if the pilots did not obey the commands of the terrorists.

The 2021.05.23.hijack had been performed in the airspace of Belarus, in a ten km from the belarussian border and in a hundred km from the destination.
No private Mig-29 is supposed to operate in the airspace of Belarus. The 2021.05.23.hijack is suspected to be organized by the top of the Belarus administration, including Lukashenko Aleksandr Grigorievich.

The search of the hijacked airplane at Minsk had been performed by agents of Belarus KGB; so, there is no way to reveal, did they indeed load the bomb that had to explode at Vilnius (if the pilots manage to escape from the Mig-29), or the message about bomb on board, since the beginning, was just misinformation from the terrorists.

Gulevich Viktor Vladimirovich, chef of the military stab of Belarus [11]

The terroristic act with use of Belarusian military ultrasonic jet is not possible to organize without involving the usurper and the top officials of his administration.

Two unnamed Belarusian terrorists are pictured when they are kidnapping journalist Roman Protasevich (at center of the last pic) [1]; this kidnapping seems to be the main goal of the 2021.05.23.hijack.

1968.02.27, the Soviet pilots shut down the Soviet training jet piloted by Gagarin Yuri Alekseevich (Гагарин Юрий Алексеевич; according to Sovetism, he was first man in cosmos) and Seryogin Vladimir Sergeyevich (Серёгин Владиимр Сергеевич); both were killed. The Soviet veterans keep in secret documents about that catastrophe. The protocols of interrogation of other pilots, who were performing flights in vicinity, are not available; even names of those pilots are not known. Such a secrecy confirms, that the terroristic act took place, and the "investigation" had been performed by organizers of that murder [21]. Up to year 2021, no Russian official version to explain this secrecy in other way is observed.

2001.09.11, 19 militants associated with the Islamic extremist group al Qaeda hijacked four airplanes and carried out suicide attacks against targets in the United States. Two of the planes were flown into the twin towers of the World Trade Center in New York City, a third plane hit the Pentagon just outside Washington, D.C., and the fourth plane crashed in a field in Shanksville, Pennsylvania. Almost 3,000 people were killed during the 9/11 terrorist attacks. [22]

2010.04.10, agents of Russian KGB bomb the Polish governmental passenger jet Tu-154M. The bomb had been activated when the aircraft approached the airstrip of the Russian military base "Severny" near Smolensk. The special brigade of killers had been sent to murder the survivors. In order to give this brigade more time for robbery of belongings of the victims, the special aircraft Il-76 had been sent to drop the heavy smoke and to simulate the four aborted attempt of landing by pilots of Tu-154M. In the Russian first official versions, the crash takes place around 9:56-10:00 of the local time at the fourth landing attempt. The Russian officials failed to support this version with records of the emergency registrators (orange "black boxes") and with the video records of the onboard monitoring system; these videos could be stored at the ground stations of monitoring of flights. Then, the Russian official legend had been modified: the time of crash had been changed from 9:56 to 9:41; the number of unsuccessful landing attempts had been reduced from four to one. Of order of 96 people were killed, all the crew and all the passengers, top of the administration of Poland. Up to year 2021, no other (official) explanation of contradiction in versions by the Russian officials is found. Links about that terroristic act are collected in article Katyn-2.

2014.07.17, the Russian pirates shout down the passenger jet Boeing 777 performing the regular flight MH17 from Amsterdam (Netherlands) to Kuala Lumpur (Malaysia). All 283 passengers and 15 crew were killed. The pirates seized belongings of the passengers and did not allow the international observers to approach the wreckage of the aircraft until all plundering had been finished. The terrorists used the Russian missile system Buk, believed to be borrowed from the Russian military base Вч 32406 at Kursk. The military attack on the passenger aircraft is considered as serious reason in favor of concept Designate Russia as state sponsor of terrorism.

In comparison to the cases mentioned, the 2021.05.23.hijack dies not look as anything extraordinary; it is usual terroristic activity of the post-Soviet tyrannies, performed by permissions of the usurpers. In such a way, qualification of the 2021.05.23.hijack as “an unprecedented act of state terrorism” [23][24][25][26] seems to be non correct.

The bombing and seizing of the passenger airplanes (air piracy) in not a new practice; it has many precedents. Some of them are listed in Wikipedia [27]

In order to avoid further hijacking of passenger airplanes in the Belarusian airspace, the European Union bans its airlines from flying over Belarus [30].

The 2021.05.23.hijack does not cause any attack on the Belarusian military airbases (where warplenes Mig-29 are stored), nor confiscation of properties of Belarusian state nor that Belarusian offees. The European administration try to stop or, at least, to slow-down the escalation or terrorism of the Belarusian dictatorship with soft sanctions. [31]

The Western security systems do not seem to perform well the fight against terrorism. They failed to catch the KGB agents who organize the terroristic acts. There are several examples indicating this. Two of them are mentioned below.

"Boshirov and Petrov" (performed attack against the UK with chemical weapon "Novichok") could be revealed soon as they had applied for the Schengen visa with the fake passports; they could be detended upon their arrival to the UK. At the time of that attack, thr simple search in the internet ireveslses, that the Boshirov and Petrov are absent in databases: they have no relatives, they have no job, they have no homes, they have no cars, no telephons, no own sites, no accounts in social networks, they did not graduated from any schools, they never were mentioned in any court documents, they did not participate in any competition nor any contest; they did not publish any book, nor even article signed by their names.

The Belarus KGB agents who followed Roman Protasevich also were not detected in time. They could bring a bomb to the airplane, mentioned in the statements by the Belarusian terrorists (as a pretext for the 2021.05.23.hijack).

Pubications about 2021.05.23.hijack are collected and analyzed in TORI with scienticic goals.

The fight against usurpation and terrorism is not element of set of these goals.

In particular, the evidences, presented in the cited literature, should not be considered as appeal to the outlaw murdering of Lukashenko and his criminal partners.

https://www.merriam-webster.com/dictionary/hijack hijack verb// hi·​jack | \ ˈhī-ˌjak// variants: or less commonly highjack// hijacked also highjacked; hijacking also highjacking; hijacks also highjacks// Definition of hijack// transitive verb// 1a : to steal by stopping a vehicle on the highway// b : to commandeer (a flying airplane) especially by coercing the pilot at gunpoint// c : to stop and steal from (a vehicle in transit)// d : kidnap// 2a : to steal or rob as if by hijacking// b : to subject to extortion or swindling