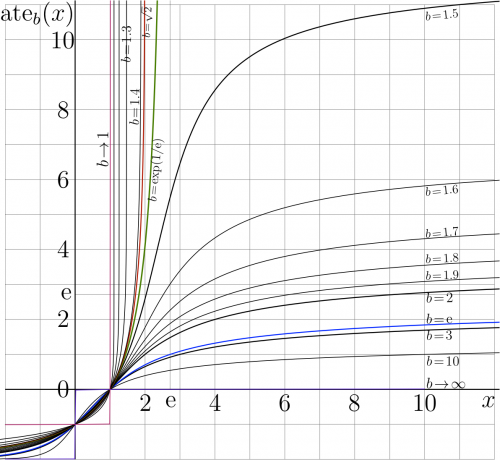 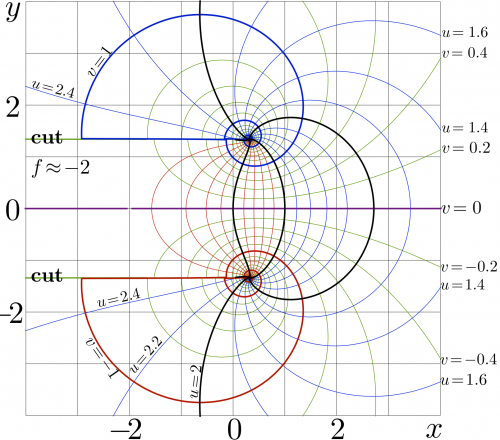 For real values of the argument, $\mathrm{ate}_b(x)$ is plotted versus $x$ at various valies of $b\!>\!1$. Being the inverse function of tetration, the ArcTetration $\mathrm {ate}_b$ to base $b$ satisfies the relations

at least in some ranges of values of $z$.

In some publications, the term super-logarithm is used instead of arctetration.

According to the definition of Abel function, ArcTetration is Abel function of the exponential. However, the additional requirement that $\mathrm{tet}_b(\mathrm{ate}_b(z))\!=\!z~$ at least in some vicinity of the real axis specifies that

and determines its asymptotic properties; in particular, its behavior in vicinity of the fixed points of the exponential, which are the branch points of $\mathrm{ate}_b$. The cut line(s) for ArcTetrational are chosen to be "horisontal" (assuming that the complex plane at the screen is vertical), they go from a fixed point of exponential to the left, to the negative values of the real part of the argument, keeping the imaginary part. In particular, for $1\!<\!b\!<\!\exp(1/\mathrm e)$, the fixed points of $\exp_b$ are real, and the ArcTetration $\mathrm{ate}_b$ has the only one cut line, that goes to $-\infty$ along the real axis.

For $b\!>\!\exp(1/\mathrm e)$, the conditions of the uniqueness are determined by the requirement of bi-holomorphism in certain range that extends from one fixed point of the exponential to another fixed point [1].

For real base $b\!>\!1$, the ArcTetration can be evaluated with numerical inversion of tetration. For $b=\mathrm e$, which refers to the "natural tetration", the 14-digit complex(double) C++ implementation is available [2].

Together with tetration $\mathrm{tet}$, the ArcTetration determines the fractional iteration of the exponential. The $c$th iteration of $\exp_b$ is defined as follows:

At $~0\!<\!c\!<\!1~$, such a function may be useful for description of processes that grow faster than any polynomial but slower than any exponential. Such functions greatly extend the ability of holomorphic fitting of dependences with non-trivial (or just unknown) asymptotic behavior.

Also, the ArcTetration can be used for the numerical representation of huge numbers, that cannot be stored in the conventional floating-point form (mantissa, logarithm). Instead of to store a huge number $N$, one may store just $\mathrm{ate}(N)$. Due to the fast growth of tetration, such a representation is not precise at all, but it greatly extends the range of real numbers that are still distinguishable from infinity. However, the arithmetical functions should be implemented in such a way, that no conversion of the number into the conventional (floating point) form is required at the intermediate steps.