Difference between revisions of "Communism" 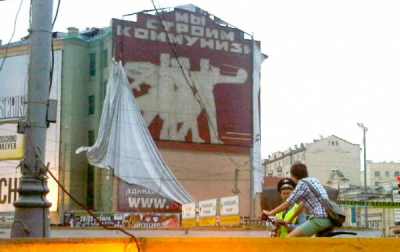 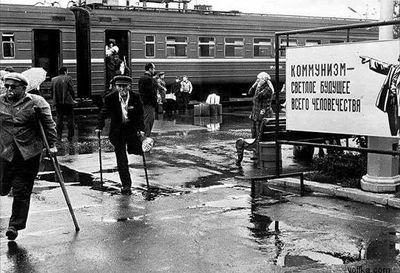 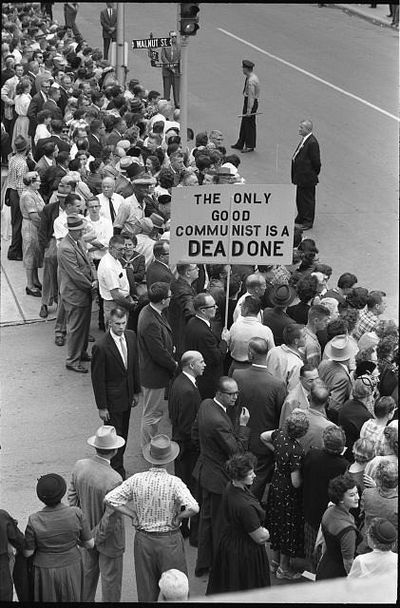 "The only good communist is a dead one". Visit of Nikita Khruschev to the USA[2]

Communism (Коммунизм) is utopic type of the legislation and public relations that makes unnecessary use of money; it is assumed that the high moral principles of the humans allow the honest and efficient work for free and also honest and prudent distribution of goods.

Also, Communism is religion, ideology and propaganda based on the postulates of ability of construction of communism in the first sense. This ideology allows any methods in the battle for constructing of communistic society by the communistic revolution.

Any person, who uses the communistic ideology, can be qualified as communist. Some of them deny the terroristic, fascistic essence of communism.

Attempts to built-up the communism

Practically, since century 20, the ideas of communism are used as pretext, justification of the mass terror, genocide, cannibalism and slavery. In TORI, the radical forms of the ideology, religion of communism are qualified as fascism, according to the definition of this term. In particular, bolshevism, as the Russian realisation of the communistic ideology, appears as the most destructive kind of communism and fascism ever known. Yurii Nesterenko even qualifies the Russian bolshevism as a specific kind of barbarianism, more destructive than any kind of fascism observed in other countries.

Events of the end of the USSR confirm that the top of the soviet veterans, who pretended to be communists, quickly converted to capitalists as soon, as it become more convenient. Soviet veterans had converted the treasures of the USSR to their personal bank accounts in the foreign (capitalistic) countires. This caused total shortage of all goods in the USSR in 1990s, and crash of the Russian rubble.

Revolution in Ukraine in 2013–2014 (Euromaidan) revealed the huge treasures of the Ukrainian soviet veterans. Especially known are the palaces of soviet veterans Vikor Pshonka and Viktor Yanukovich.

Since the Russian invasion into Ukraine (2014 February – 2014, April), the traces of the Gold of party are especially of interest, id est, the money the Soviet veterans had hidden since the end of the USSR. It is believed that Vladimir Putin had organised the export of the communistic treasure from the USSR to the Western Europe and the USA, and still handles of order of $10^{11}$ dollars at the accounts of his buddies there [3][4][5].

Practically, the attempts of construction of communism in century 20 leaded to terror and fascism. The most long and huge attempt is observed in the USSR, the Russian realisation of communism is called bolshevism. The titania of the Soviet veterans in the USSR had converted Russia to the barbarian country with high level of corruption and other kinds of criminality, consumption of tobacco and other drugs, alcoholism and other indications of degradation. Similar events are observed in the neighbour countries (Ukraine, Belarus, Caucasus republics, Kazakhstan, North Korea). In this sense, in century 21, communism is discredited as ideology.

In China, at least up to year 2014, it is still used as the official doctrine. The scientists, in order to handle their research, are requested to join the Communist party of China. However, in century 21, China is so far from realisation of the communistic utopia, as it was in the middle of century 20; and the structure of economics of China indicates that very few (if at all) Chine people practically follow the communistic religion, they use it as a children count, like a story of Moomintroll at Suomi, or as a legend of Santa Clause in the USA, Canada and Europe.

Need for international condemnation of crimes of totalitarian communist regimes

1. The Parliamentary Assembly refers to its Resolution 1096 (1996) on measures to dismantle the heritage of the former communist totalitarian systems.

2. The totalitarian communist regimes which ruled in central and eastern Europe in the last century, and which are still in power in several countries in the world, have been, without exception, characterised by massive violations of human rights. The violations have differed depending on the culture, country and the historical period and have included individual and collective assassinations and executions, death in concentration camps, starvation, deportations, torture, slave labour and other forms of mass physical terror, persecution on ethnic or religious grounds, violation of freedom of conscience, thought and expression, of freedom of the press, and also lack of political pluralism.

3. The crimes were justified in the name of the class struggle theory and the principle of dictatorship of the proletariat. The interpretation of both principles legitimised the “elimination” of people who were considered harmful to the construction of a new society and, as such, enemies of the totalitarian communist regimes. A vast number of victims in every country concerned were its own nationals. It was the case particularly of the peoples of the former USSR who by far outnumbered other peoples in terms of the number of victims.

4. The Assembly recognises that, in spite of the crimes of totalitarian communist regimes, some European communist parties have made contributions to achieving democracy.

7. The Assembly is convinced that the awareness of history is one of the preconditions for avoiding similar crimes in the future. Furthermore, moral assessment and condemnation of crimes committed play an important role in the education of young generations. The clear position of the international community on the past may be a reference for their future actions.

8. Moreover, the Assembly believes that those victims of crimes committed by totalitarian communist regimes who are still alive or their families, deserve sympathy, understanding and recognition for their sufferings.

10. The debates and condemnations which have taken place so far at national level in some Council of Europe member states cannot give dispensation to the international community from taking a clear position on the crimes committed by the totalitarian communist regimes. It has a moral obligation to do so without any further delay.

11. The Council of Europe is well placed for such a debate at international level. All former European communist countries, with the exception of Belarus, are now members, and the protection of human rights and the rule of law are basic values for which it stands.

12. Therefore, the Assembly strongly condemns the massive human rights violations committed by the totalitarian communist regimes and expresses sympathy, understanding and recognition to the victims of these crimes.

13. Furthermore, it calls on all communist or post-communist parties in its member states which have not yet done so to reassess the history of communism and their own past, clearly distance themselves from the crimes committed by totalitarian communist regimes and condemn them without any ambiguity.

14. The Assembly believes that this clear position of the international community will pave the way to further reconciliation. Furthermore, it will hopefully encourage historians throughout the world to continue their research aimed at the determination and objective verification of what took place.

Revival of the communisitc ideas in century 21

Many authors indicates the growing popularity of the Soviet communistic leaders in Russia of century 21. Communists qualify Josef Stalin not as a fascistic murdered, not as a cruel barbarian, but as an "Effective manager.

Vladimir Putin qualifies the crash of the USSR as a "geopolitic catastrophe". In Russia, the textbooks on history of the USSR are rewritten in order to hide the criminal activity of the soviet veterans; again, as in the USSR, in the school courses, the soviet veterans appears not as aggressors, not as occupants, but as peaceful and prudent heroes.

On the background of the growing Russian fascism (Russism, the similarities between Putin and Hitler are widely discussed. Even the putinists see these similarities; in order to glorify Putin, the activity of Adolf Hitler (at least before years 1940s), is considered as efficient and positive.

2008.05.16. https://www.usnews.com/news/national/articles/2008/05/16/how-communists-operate-an-interview-with-j-edgar How Communists Operate: An Interview with J. Edgar Hoover, Director, Federal Bureau of Investigation. May 16, 2008, at 2:00 p.m. This story originally appeared in the August 11, 1950, issue of U.S.News & World Report. .. The basic premise of Communism is deceit and hypocrisy. The Communist philosophy teaches that every available means must be utilized to achieve the final end—world revolution. For this reason the Communist will lie, cheat and resort to any tactics which will gain his end. He will advocate today exactly what he denounced yesterday. And with a straight face! Has he lied? No, he will say, he's only carrying out party policy. The concept of morality and fair play, as practiced in our democracy, is alien and repugnant to him. Moreover, the Communists employ a purposive double-talk, roundabout style, known as "Aesopian language," in their literature and speeches, designed to deceive and evade to clothe their true thoughts. This technique, utilized by Lenin, is the very epitome of deceit.