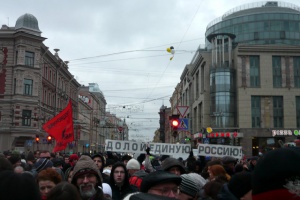 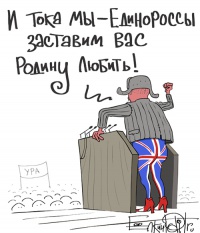 Edro, transliteration from Russian Едро, ЕдРо, Единая Россия - ruling political party in Russia of beginning of century 21. This party is believed to collect terrorist, robbers, knives, impostors and betrayers of all kind.

The party was created in approximately year 2000 for support of Vladimir Putin and does not seem to have any other goals.

The party is known for the freaks such as clean water, gravitsapa, Amphoras scandal.

The party become famous in 2011 by the mass fraud at the parliament election in 2011.12.04; the estimates show, that the most of of ballots in favor of that party are fake. That fraud caused the mass protests. The evidences of the fraud at the 2011.12.04.Election indicate to the same point, forming "a very strong case" [3]. One thinks, that at the beginning of century 21, the edros keep the superior power in Russia due to the massive election fraud. This opinion agrees with the results of the statistical analysis [4][5][6] of the "official" published data of the results of the parliamentary election.

Edro is believed to be handled from the United Kingdom [2]. There are many jokes about edro in the internet [7]; the handling from the USA is also considered [8].