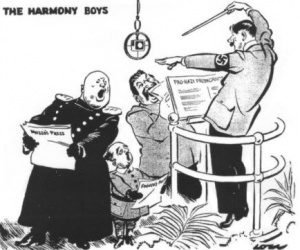 Fascism (Фашизм) is a political ideology, practice and religion that seeks national unity through patriotism, collectivism and strong suppression or extermination of any liberalism and opposition. Fascism generally treat any individual as a subservient to the group; those who do not accept this are considered as enemies; the dictatorship of the strongly organized group is justified. Fascism usually implies the existence of a at least one strong leader, fuhrer; the canonical texts by the leader are considered as irrefutable true. In such a way, fascism substitutes all the historical concepts of morality with submission to the interests of the patriotic group, expressed by the leader. 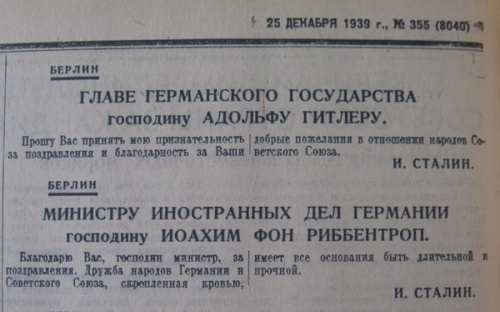 The idea of fascism, the self-identification and ethimology

The main assumption of the fascistic religion, fascistic elite, fascistic group is that the superiority gives namely this group the moral right to dominate over all other people and use all methods necessary to provide such domination: propaganda of xenophobia, terror, racket, taking hostages, the war of extermination, cruelty. These methods, both theory and practice in Russia were well described by V.Lenin since the beginning of the century 20.

Fascism is characterized with negative attitude with respect to intents of its discussion, critics and identification. Typical for fascism is the cult of the leader, the believe to the wisdom and the good will of the leader. In general, fascists do not identify their ideology as fascism; there is only one exception: in 1930s–1940s, the Italian fascists called their main canonical text The doctrine of fascism, after their leader Benito Mussolini [1]. Fascism means "unity", Corporate personality, collective protectionism, and implies that some group, party, mafia suppresses all other (less organized) humans.

The term Fascism arises from Italian fascismo, fascio, (Latino fasces) that means fascine - a rough bundle of brushwood used for strengthening an earthen structure, or making a path across uneven or wet terrain; fascines often are considered as some cheap, available substitute of a more serious material. The ethnology has deep analogy; fascism is also a way to make a temporally–strong society from very weak and amoral members.

The ideas of fascism may look very attractive [2]. If a country has no immunity to fascism, it spreads faster than the majority of people understand, what is happening to their society.

Elite and their methods 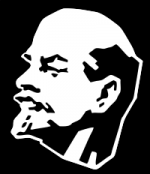 The elite, that unites the fascists, may be realized as a social class, a nation, rase, Sect. It is postulated that the elite leads the society and all the Humanity to the prosperity, happiness, progress and, therefore, they should use any methods to provide their dominance. Such methods may include the terror [3], concentration camps [4], racket [5], spend of the enormous budget for the agitation and propaganda [6], genocide [7], confiscation of food [8] и and other properties, arresting and killing of hostages [9], mass murders of not only enemies but also the neutral civilians [10], destruction of communications [11] blocking of the food delivery to the starving regions [12], total censorship and centralized mass-media companies aiming defamation of opponents [13] and the secret political murders. V.Lenin used to describe such a politics in the article “Democracy” and Dictatorship [14]. Fascism accepts terror as necessary state practice, it is justified and legalized [15]. In a fascist state, the security forces follow any order of the leader. To some extent, the term "illegal" loses its usual meaning: the laws are edited aiming to justify any action of the ruling party, up to expulsion or physical elimination of the former party members. However, even these laws in fascist states are systematically violated, the criminal traditions become dominant, and the police follows these traditions instead of the law [16]. The indicator of the fascist state is the single-party system, although not every fascist state dare to declare such a system in the Constitution [17]. 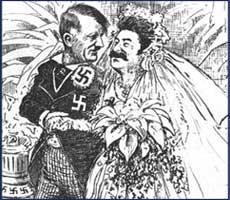 In the 1920s-1930s, the ideas of fascism came to Germany and then to Italy. The canonical text that describes the essence of German Fascism (i.e. Hitlerism) is Adolf Hitler's book My Struggle (Mein Kampf) [18].

In Hitlerism, as adopted by the elite of the Aryan race, and the main enemies are Jews, their ethnicity and their nation. According to this feature, Hitlerism is also called Nazism. The choice of victim makes the main difference between Hitlerism and Stalinism (named after Stalin, the leader of the USSR), in which the enemies are identified by their class origin. Until year 1941, both Hitlerism and Stalinism collaborated in the destruction of internal enemies and offending (occupying) the neighbor countries [19][20] [21][22]. Many English translations of texts of the Nazi and post-nazi propaganda are available at the Calvin's site [23]. The German fascism has many similar with the Soviet fascism; in particular, the German and Soviet fascists used similar songs [24] and distributed similar pictures [25].

The concept of fascism refined in the Italian leader Benito Mussolini's Fascist doctrine (La dottrina del fascismo) [1] published in 1933. This doctrine expresses the essence of fascism in general terms allowing the application to different countries and epochs. That article gave fascism its current name. Fascism offers humanity new absolute ethics, replacing all of the historical foundations of morality.

1. Powerful and Continuing Nationalism Fascist regimes tend to make constant use of patriotic mottos, slogans, symbols, songs, and other paraphernalia. Flags are seen everywhere, as are flag symbols on clothing and in public displays.

2. Disdain for the Recognition of Human Rights. Because of fear of enemies and the need for security, the people in fascist regimes are persuaded that human rights can be ignored in certain cases because of "need." The people tend to look the other way or even approve of torture, summary executions, assassinations, long incarcerations of prisoners, etc.

3. Identification of Enemies/Scapegoats as a Unifying Cause. The people are rallied into a unifying patriotic frenzy over the need to eliminate a perceived common threat or foe: racial , ethnic or religious minorities; liberals; communists; socialists, terrorists, etc.

4. Supremacy of the Military. Even when there are widespread domestic problems, the military is given a disproportionate amount of government funding, and the domestic agenda is neglected. Soldiers and military service are glamorized.

5. Rampant Sexism. The governments of fascist nations tend to be almost exclusively male-dominated. Under fascist regimes, traditional gender roles are made more rigid. Opposition to abortion is high, as is homophobia and anti-gay legislation and national policy.

7. Obsession with National Security. Fear is used as a motivational tool by the government over the masses.

8. Religion and Government are Intertwined. Governments in fascist nations tend to use the most common religion in the nation as a tool to manipulate public opinion. Religious rhetoric and terminology is common from government leaders, even when the major tenets of the religion are diametrically opposed to the government's policies or actions.

9. Corporate Power is Protected. The industrial and business aristocracy of a fascist nation often are the ones who put the government leaders into power, creating a mutually beneficial business/government relationship and power elite.

10. Labor Power is Suppressed. Because the organizing power of labor is the only real threat to a fascist government, labor unions are either eliminated entirely, or are severely suppressed .

11. Disdain for Intellectuals and the Arts. Fascist nations tend to promote and tolerate open hostility to higher education, and academia. It is not uncommon for professors and other academics to be censored or even arrested. Free expression in the arts is openly attacked, and governments often refuse to fund the arts.

12. Obsession with Crime and Punishment. Under fascist regimes, the police are given almost limitless power to enforce laws. The people are often willing to overlook police abuses and even forego civil liberties in the name of patriotism. There is often a national police force with virtually unlimited power in fascist nations.

13. Rampant Cronyism and Corruption. Fascist regimes almost always are governed by groups of friends and associates who appoint each other to government positions and use governmental power and authority to protect their friends from accountability. It is not uncommon in fascist regimes for national resources and even treasures to be appropriated or even outright stolen by government leaders.

14. Fraudulent Elections. Sometimes elections in fascist nations are a complete sham. Other times elections are manipulated by smear campaigns against or even assassination of opposition candidates, use of legislation to control voting numbers or political district boundaries, and manipulation of the media. Fascist nations also typically use their judiciaries to manipulate or control elections. 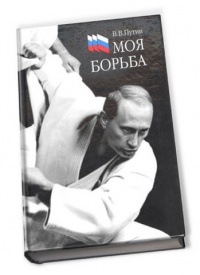 After the century 20, the hitlerism and stalinism are condemned; in general, any fascism is not welcomed in civilized countries. In some countries, the book Mein Kampf is banned [27] The ban give the neo-fascists [28][29] more opportunities: they recycle the fascistic ideas and re-use them without to cite the sources. The groups, united with the collective narcissism, pretend to be "anti-fascists", while they never had red the classic fascists documents and can neither classify, nor even identify the phenomena of fascism in century 21 [30][31].

Words fascism and fascist are also often used as a pejorative name. This was lucidly described by George Orwell [32][33]. Often, the term "fascism" is used without any other semantic meaning. In particular, the nashists by themselves use the term 'fascism' with respect to any ideology, different from nashism (and rejecting the application of the term to their own group, party). The bans on the canonical fascist texts serves the spreading of fascism rather than its suppression; the members of a political organization have no opportunities to see similarities in the canonical fascist texts and the doctrines of their own parties; again and again, they invent the fascistic ideas by themselves [34][35][36][37].

The terroristic acts similar to the Nevsky Express bombing (2009) appear as phenomena of fascism, as use of any methods for the goal of dominance; the same can be said about practice of murdering of journalists and other political opponents.

http://www.youtube.com/watch?v=GHs2coAzLJ8 Triumph des Willens (1935) - Triumph of the Will. Sep 22, 2011 Triumph of the Will (German: Triumph des Willens) is a propaganda film made by Leni Riefenstahl. It chronicles the 1934 Nazi Party Congress in Nuremberg, which was attended by more than 700,000 Nazi supporters. The film contains excerpts from speeches given by various Nazi leaders at the Congress, including portions of speeches by Adolf Hitler, interspersed with footage of massed party members. Hitler commissioned the film and served as an unofficial executive producer; his name appears in the opening titles. The overriding theme of the film is the return of Germany as a great power, with Hitler as the True German Leader who will bring glory to the nation.

http://www.imrussia.org/en/politics/516-why-the-regime-cultivates-the-concept-of-the-national-insecurity Why the Regime Cultivates the Concept of the “National Insecurity”. 19 July 2013.

Russian version of this article: Фашизм