Difference between revisions of "Fisherman and Developer" 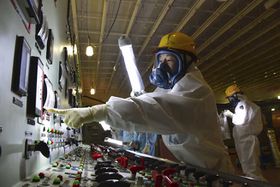 They lived very near one very big and very Pacific Ocean.

Ojiisan returned his home, and told to Obaasan about Developer:

- You failed to catch our luck with the Developer!.
At least, we could power the electric pump for the rice field; our old water wheel has completely decayed..
Go to the Pacific Ocean! Catch up with the developer! let them supply us with at least one reactor.

And Developed built-up several reactors, and there was very nuclear plant, very near the very Pacific Ocean.. Obaasan sold the electricity, and she built-up the new home, and the paved road, and she carried her rice to the market with the electric lorry..

- What do you want, Oldman - Developer asks.