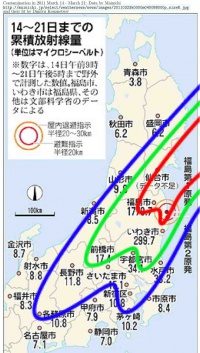 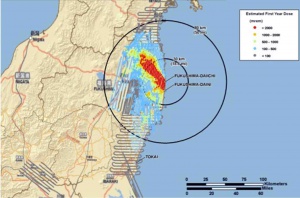 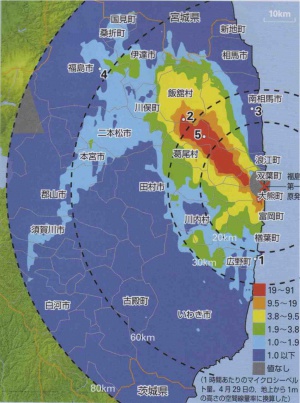 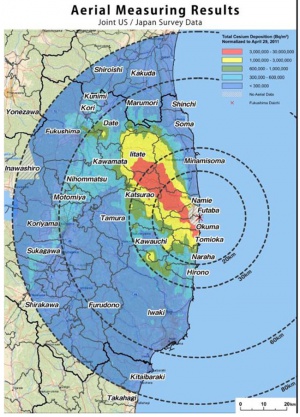 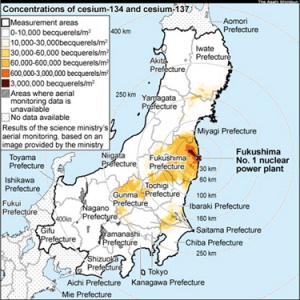 Fukushima disaster is the catastrophe 2011 March 11 at the Fukushima nuclear plant (Japan), coordinates [141.03292, 37.42297]. The catastrophe was caused by the series of the earthquakes in March 11 (estimated to have magnitude 8.9 by the Richter's scale) followed by the series of tsunami. The strong tsunami had destroyed the generators of cooling system of the reactors, causing explosions of some of them within a week after the earthquake. Wide radioactive contamination of the Honshu iceland (see the pic) is usually attributed to this catastrophe. During a month, the rank of the catastrophe raised up since 4 to 5 and then to 7; since 2011 April it is qualified with rank 7, the same as the Chernobyl disaster. In 2011 April, the level of radiation slows down; no future increase of the rank is expected.

Since 2013, the daily updating maps of contamination of Japan are available at

At the beginning of the earthquake, 2.46pm local time on March 11, 2011, all the reactors in Japan were quickly shut-down. After such an emergency stop, the reactor requires the forced cooling during several days, consuming the electric power. Such a cooling was arranged by special water-pumps and the emergency back-up generators. These generators were destroyed by the tsunami followed the earthquake. The mobile generators were sent, but their power is lower, than that the damaged back-up generators were supposed to provide. This caused lack of the cooling water pumped in to the hot cores of the reactors that caused the partial destruction of some of them, causing the series of explosions during a week after the earthquake.

The lack of information about the events at Fukushima and hiding of information about the contamination by the Japanese authorities enables the concept, that initially the accident was not so bad, but poor management and the irresponsible handling converted it to the world-wide disaster. The gradual development of the catastrophe has deep analogy with the Chernobyl disaster [7][8][9] and some authors consider it to be worse than Chernobyl [10][11][12][13]; in the case of Chernobyl, first, the explosion also was reported as a small accident.

Some 170,000 people have been ordered to evacuate the area covering a radius of 20 kilometers around the Fukushima plant. After a month, the evacuation zone had been extended to 30km. April 11, the severity rate is raised to 7, setting the accident to the same scale as the Chernobyl disaster [14]. Certain doubts are expressed if the operators of the station did their best while the catastrophe was unfolding [15]; the government is also criticized for hiding of the information about the catastrophe[16]. In 2011 May, meltdown of the cores of the reactors had been confirmed [17][18]. After such a confirmation, the map of contamination[4] is released. 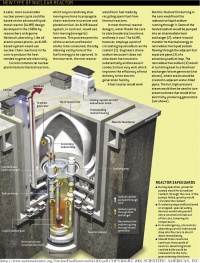 All the reactors at Fukushima are built-up above the ground. Past century, Nobel laureate Andrei Sakharov had told, that the above–ground nuclear reactors are dangerous and should be prohibited by the special law [20]; up to year 2011, such reactors are not yet prohibited. Until the 2011 March, many people in the Fukushima prefecture believed that the reactors are safe. The Fukushima catastrophe may be one additional important argument to push forward the prohibition of the above-ground reactors.

The journalists try to understand: why the country (which is most advanced in the industry of robots) had to send the workers-kamikaze to cool the reactors, instead of to send robots [21][22][23]. According to publications, no one robot took part in the cooling of the reactor, although some attempts to use a robot for the automatic registration of radiation are discussed [24][25].

As in the case of the Chernobyl disaster, the hiding of the information about the level of contaminaiton was the strongest warning about the danger. Correspondents of the Washington Post had mentioned that the representatives of the Tokyo Electric Company had revealed almost no information on the things that are happening [26][27].

2011 April 6, Sebastian Pflugbeil had expressed very negative opinion about the ability of the Japanese officials to provide the adequate information about the Fukushina's catastrophe [13]. During a month, these officials could not estimate even the order of magnitude of the amount of unstable isotopes released [14]. 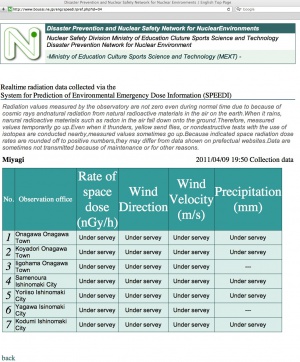 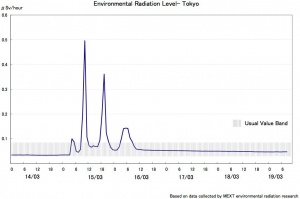 March 18, some data about the contamination were released [28] by the Government. Soon, the site of newspaper Mainichi had released the map [29], where at some cities (except Sindai and Fukushima) the data about radiation are printed; these data are used to make the fit shown at the top. However, the units of measurement are not clearly specified in this map, this makes difficulties in the comparison of data [29] by Mainichi to the data [28] by the Government. The qualitative agreement takes place under assumption that the numbers at the Mainichi map mean amount of mS/year, while the data government use the unit \(\mu\)Sv/hour.

At the beginning of 2011 April, with enormous efforts by the emergency workers, the cooling of the reactors seems to be arranged; the situation seems to be stabilized at some intermediate level of emergency [30][31][30], but the officials from TEPCO and government have lost the fiance of the people [32][33]. The official maps with lines of constant level of radiation were not published, and the dangerous zone is still (beginning of April, 2011) considered as a circle (of radius of 30 km) centered at the Fukushima Daichi nuclear plant. The fit a the top figure cannot be considered as an official release. The information about the radiation at Sendai ( 仙台市 ) seems to be intentionally hidden. The hiding of the information about the disaster caused many foreign workers to leave from the country [33][34].

The first maps of contamination were provided by Declan Butler [35] and then by the Jonocelyn Kaiser [2] but neither by the Japanese government, nor by the TEPKO (who were expected to handle the case). As in the case of the USSR (Chernobyl, 1986), the citizen have to get information about events happening in their own country from the foreign publications.

The data by "Nature" and "Science Insider" data could be used to correct the approximation of data by Mainichi, shown in the top figure, but the calibration is necessary to avoid effects of the observational selection: the data by Mainichi[29] lack the description of the methodic of evaluation. Then, the more recent and more detailed maps of contamination [2][4] [36] were released.

Isotopes released, their Halflife (halftime) and their radioactivity in Bq for 3 Reactors and Total

Specification of the contaminants in the publication should be considered as evidence of the honest attitude of the professionals, working in dosimetry, to the people of Japan (at least since year 2015).

Discrepancy in the data

The scale of the disaster due to Fukushima happens to be much lower than that in the estimates [8][9][10][11] (and in particular, much lower than that due to the Chernobyl disaster); the main leaks of radiation seem to be fixed [30][31]. The nuclear fuel is supposed to remain in the confinement vessels, not burn up to the atmosphere, as in the case of Chernobyl. The question arises about the source of the contamination registered in the USA, Canada and other countries. Two hypothesis are described in the articles Who contaminates Japan and Russia used the nuclear weapon in 2011. Each of them can be considered as a kind of a conspiration theory, although the ways to check (to confirm or to negate) these hypothesis are suggested, and for beginning of 2011 April, no other explanation of the strong disagreement in the estimates of the level of contamination seem to be available.

None of the hypothesis mentioned above explains the apparent hiding of the information about radioactive contamination by the Japanese authorities. The detailed map of the contamination (similar to or better than that shown at the top figure) for 2011 March 11-21, as well as for the 2011 April would be the good answer; such answer appeared in 2011 June [36].

In the later maps of the contamination, say, since 2011 April, the main spot of contamination seem to be at Fukushima-1; then it seems to be dominant source of radioactivity. Tetsuo Matsui (Institute of Physics, University of Tokyo, Komaba, Tokyo, Japan) shows that the ratio of isotopes released indicates that the chain reaction at the Unit-2 reactor at Fukushima had been reignited after the earthquake [38]. Such a concept contradicts the statements by TEPCO that the all the reactors were successfully shut down.

Don Higson indicates that the amount of victims of the Chernobyl disaster is for orders of magnitude higher than that due to the Fukushima disaster [40]. His opinion agrees with the concept that the Chernobyl disaster was intentionally caused by the bad will of the soviet veterans (not only by their poor education and ignorance, see the article nuclear chimney), although the published information still does not allow to choose between various interpretations of the events.

Several other questions are formulated about this accident. 2011 March 19, the link to the questions below has been uploaded to the the Cabinet of the Prime Minister of Japan, at the section about the Countermeasures for the Great East Japan Earthquake [41]. As no reply has been received, the questions are moved to Fukushima disaster, questions; some of them are already with answers there.

The detailed map of contamination appears at http://www.nnistar.com/gmap/fukushima.html with delay of three months since the disaster. There are no indications about its future update since summer, 2011.

The Fukushima Network for Saving Children from Radiation qualify the behavior of Japanese Government in terms "Violation of the Human Rights of the Children of Fukushima" [43].

At the end of September, 2011, under the pressure of numerous protests, the government of Kan Naoto had to resign.

2011 December 16, the prime minister Yoshihiko Noda had declared that the consequences of the disaster due to the explosions of the nuclear reactors at the Fukushima 1 nuclear plant are under control [44], although it is not clear, what conditions melted fuel remains in the reactors or keep radioactive materials from being released outside. The next step of recovery after the disaster may take decades [45]. The people evacuated from Fukushina demand the apology payment of \(625 a month for each victim until all the radiation from the accident is wiped out [46].

In 2012, the sabotage of the officials distributing of the most important information – data of the radiation monitoring – is still discussed [47]. The inability of the Japan administration to handle and to distribute the information is strong argument against any nuclear plant. The perspectives of the future development of Japan without nuclear power are considered [48][49].

In 2012, the new fraud about Fukushima has been reported by the RT agency [50]. According to the news, the administration asked the workers to provide fake data about the radiation exposure. Such a fraud add doubts to the question about ability of the human society to deal with nuclear energy in a civilized way. However, the RT agency do not specify the sources of information, nor name the persons, organized the fraud.

The updated map of contamination is available at http://jciv.iidj.net/map/

Monitoring of contamination in prefectures

Even more links in chronologic order are at Fukushima disaster, timeline of links.