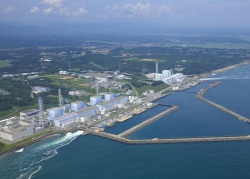 All the reactors at Fukushima are built-up above the ground. Past century, Nobel laureate Andrei Sakharov had told, that the above–ground nuclear reactors should be prohibited by the special law [1]; up to year 2011, such reactors are not yet prohibited. Until the Fucushima catastrophe (2011 March 11-April) many people in the Fukushima prefecture believed that the reactors are safe.

After the earthquake 2011 March 11, the First plant at Fukushima had serious problems: the tsunami damaged the cooling system; the overheating caused seres of explosions and wide radioactive contamination of the Honshu island and Pacific ocean. This catastrophe is described in the article Fukushima disaster; the questions about Fukushima (and the nuclear energetics in general) are collected at Fukushima disaster, questions.

Masataka Shimizu (president of Tepco which owns the Fukushima nuclear plants), and Kan Naoto (prime minister of Japan), are suspected in hiding information about the Fukushima disaster [2][3]. Such an information would allow the farmers to collect the premature harvest and to sell the cattle to the meat factories before the food gets contaminated with unstable isotopes. Practically, the map of contamination was released only in June–July, about of three months after the catastrophe [4].