Article Funeral of Kyoko Okudaira describes small part of history of Kyoko Okudaira (きょうこ おくだいら), who worked as administrator ("secretary") of Institute for Laser Science since century 20, grown up children and dead in 2016.02.19. This article is about her funeral. 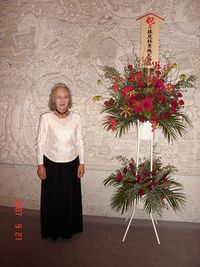 1936.07.15, Kyoko born in family of Hiroshi Hasegawa and Leiko Hasegawa at Tokyo.

1961.11.10, Kyoko marries with Kouzou Okudaira and changes her last name from Hasegawa to Okudaira.

1983–2015 Kyoko works as secretary of Institute for Laser Science gradually converting to its administrator.

Since 2015, Kyoko has problem with health and cannot perform her duties.

The funeral had not been announced; only the family could assist:

Warning: the data of this article are incomplete, preliminary and may contain (and perhaps do contain) mistakes, errors. The corrections should be appreciated.

The editor of TORI is surprised, that the funeral had not been announced: Colleagues, who worked with Kyoko, cold not use this opportunity to meet each other and to share their memory about Kyoko.

Colleagues, who worked with Kyoko and have more accurate data, are invited to write more competent article. The same refer to relatives, and, especially, to those who know well Japanese. Now is time to do this.

Relatives who have something to say about Kyoko Okudaira are are also invited to share these knowledge (in any language and any mode). TORI is critical site; in TORI, neither Presumption of innocence nor De mortuis aut bene aug nihil are used as criteria of evaluation of material for the articles. In such a way, both, complementary and critical opinions are important. However, the TORI axioms still are assumed; irrefutable concepts, unsupported critics and anonymous statements may be rejected without consideration.

The people should know about Kyoko, in order to learn from her life, what can be done good in this world, and what errors have no need to be repeated.