Difference between revisions of "LoveRead"

The strange phenomenon is observed at this page: its content seems to depend on the operational system, used to access it. One example is mentioned below.

In particular, the tale Neznaika at Moon (Незнайка на Луне, in Russian) is presented at

However, the look of this fairy tale depends on the computer, used to browse the site. Here are two screenshots of viewing of the same URL from different computers: 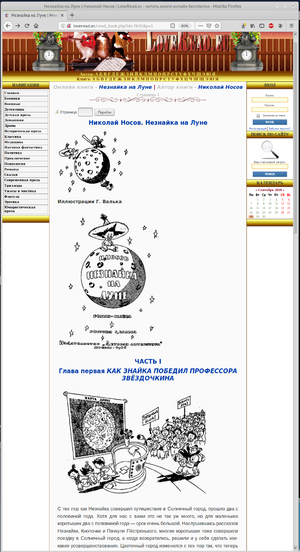 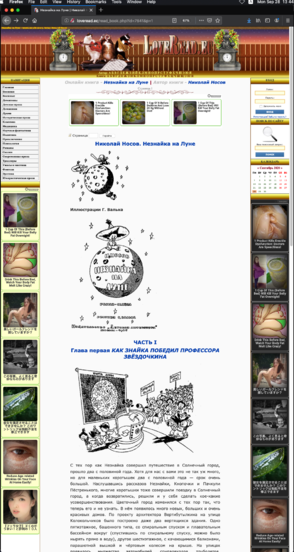 In the second case, the pictures appear at the top, at the left and at the right hand side of the children's fairy tale. The pictures are actually links to sites, that are of low quality and too complicated for children. Adding these pics and links may be interpreted a an abuse, a trolling.

It is interesting to reveal, at which stage of transmittance of information, the additional (and unwanted) pictures and links appear. The followig hypothesis should be considered:

1. The bug, badwere is installed at Macintosh computer, that disturbs the reading of the fairy tale with parasite advertisement.

The bug, badware is installed at some of nodes of the communication line, that replaces the original content of the site with some similar surrogate.