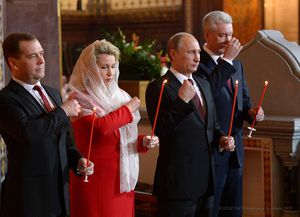 Dmitrii Medvedev and Vladimir Putin with spouses at the Russian Orthodox church, 2013 May 5 [1]

Same sex marriage is union between two humans of the same sex, similar to the conventional marriage in the Western civilization. Usually, it is assumed that two men, making such a union, are in the homosexual relations. The same applies also to a couple of two women. Permission of prohibition of registration of the Same sex marriages cause discussions in many countries.

The same-sex relations have long tradition in Russia. While formally prohibited in the USSR, the homosexuality was promoted at the top level of the soviet administration. In general, it was prohibited to rent a room in an hotel to a couple, if they were not of the same sex; the only exceptions were done, if the "clasical" (man and woman) couple could present a proof, that they are husband and wife. However, the rich couples of the "traditional" orientation could bypass the prohibition with bribes.

The male leaders of the communist party of the USSR used to promote the same–sex relations, kissing other men in front of telecameras. In century 21, the homosexual traditions of the Soviet veterans are supported by the leaders of Russia [2]. In photo at right, Vladimir Putin treats Sergei Sobianin, as if Sobianin would be his spouse.

Human homesexuality may compete with Zoophilia [3].

Humor about the same-sex marriage