Sarin (Зарин) is toxic chemical believed to used by Vladimir Putin and Bashar Assad in Syria in 2017 as chemical weapon.

Bashar Assad claims that his warplanes did not drop chemical weapon.

Use of sarin as chemical weapon is considered as war crime and reason to investigate and evaluate activities of Bashar Assad and Vladimir Putin and their administration in the international court, Hague.

Total corruption of all officials in Russia makes impossible the control on distribution of the Russian chemical weapon, not investigation of the application against civilians. 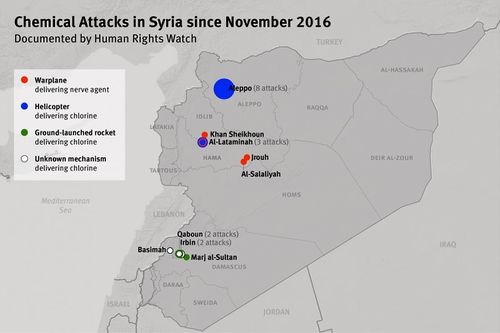 2017.04.26. http://www.reuters.com/article/us-mideast-crisis-syria-intelligence-idUSKBN17S0RY ohm Irish. French intelligence says Assad forces carried out sarin attack. Wed Apr 26, 2017 | 10:22am EDT. French intelligence has concluded that forces loyal to Syrian President Bashar al-Assad carried out a sarin nerve gas attack on April 4 in northern Syria and that Assad or members of his inner circle ordered the strike, a declassified report showed. .. Moscow was attempting to discredit the OPCW, the source said: "There is a propaganda effort by Russia to say that the OPCW's work is not credible."

2017.05.01. https://www.hrw.org/news/2017/05/01/syria-new-evidence-shows-pattern-nerve-agent-use Syria: New Evidence Shows Pattern of Nerve-Agent Use. May 1, 2017 10:51AM EDT. Government Enters Realm of Crimes against Humanity. New York) – New evidence supports the conclusion that Syrian government forces have used nerve agents on at least four occasions in recent months: on April 4, 2017, in a chemical attack on Khan Sheikhoun that killed at least 92 people, and on three other occasions in December 2016 and March 2017, Human Rights Watch said in a report released today. These attacks are part of a broader pattern of Syrian government forces’ use of chemical weapons. The attacks are widespread and systematic and in some cases have been directed against the civilian population. These two features mean the attacks could meet the legal standard required to characterize them as crimes against humanity. As part of the evidence showing these attacks have become widespread and systematic, the 48-page report, “Death by Chemicals: The Syrian Government’s Widespread and Systematic Use of Chemical Weapons,” identifies three different systems being used to deliver chemical weapons. .. Photos and videos of weapon remnants that struck Khan Sheikhoun on April 4 appear to be consistent with the characteristics of a Soviet-made air-dropped chemical bomb specifically designed to deliver sarin.