Difference between revisions of "Sovetism" 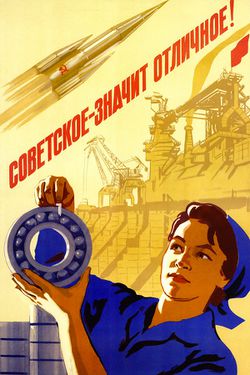 Sovetism (Sovietism, советизм) is religion of the soviet fascism; it is based on the doctrines of bolshevism. Sovietism postulates the efficiency of the so-called socialistic economics, prudence and honesty of the Soviet leaders, existing of freedom and democracy in the USSR and other statements, that can be used as excuses for the crimes of the KGB agents, members of the Soviet Communist party (KPSS) and, in particular, soviet genseks.

As any other religion, sovetism is based on the certain set of postulates. They are more numerous, than the TORI axioms are. Some of thesis of Sovietism are listed below.

7. Citizen and residents of the USSR have all the civil rights and freedoms; in the USSR, everyone is equal before the law.

8. The Soviet republics, that form the USSR, are equal in their rights; they may exit from the USSR, but remain in the USSR voluntarily. The interaction between these republics is based on friendship and mutually beneficial cooperation.

9. Gagarin Yuri Alekseevich flew into space. He was the first man in cosmos.

11. The Soviet people managed to defeat the corruption, that is typical of the capitalist countries. Honesty and prudence are the norms of life of Soviet people.

14. The Communism is the bright future of all mankind.

15. In 1979, Soviet troops, at the request of Afghan leader Amin, entered Afghanistan to fulfill their international duty and to help the Afghan people.

20. Soviet leaders by themselves show examples of patriotism and courage in the struggle of the Soviet people for the ideals of communism.

21. Even if there is anything bad or wrong in the USSR or in the post-Soviet Russia, it is isolated and non-typical case.

As any kind of axioms, discussion of postulates of sovietism is not allowed within sovietism. Any doubt is postulates of sovetism, any deviation from the postulates, as well as doubts in the good will of the Soviet leaders, furriers is denoted with term Antisovetism (or Antisovietism). In particular, in Sovetism, it is pohibited to discuss possibility of collapse of the USSR; it is prohibited to estimate, when the Soviet Union may collapse; it is prohibited to share information about any contradiction between thesis of Sovetism and the direct observations; even such observations themselves are qualified as anti-Soviet propaganda, as antisovetism.

During USSR, adepts of sovietism, Soviet veterans use to kill, to eliminate any heresy, any doubts in their postulates. The Soviet veterans keep in secret the most important historic documents, that reveal the scale of their crime. Estimate show, that during the USSR, the Soviet veterans kill of order of 10^8 people, mainly their compatriots, id est, of order of half of population of the USSR and Soviet colonies. Sovietism either negate the fact of the Soviet repression, or suggest estamates, for orders of magnitude lower, than that, suggested in article Большевики убили почти всех (in Russian).

Postulates of Sovietism contradict the direct observations. In addition, Sovietism has many internal contradictions; it is not self-consistent. For this reason, any scientific concept, related to USSR, Russia or communism, is unavoidably anti-Soviet, id est, kind of antisovetism. 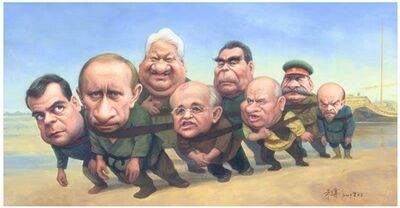