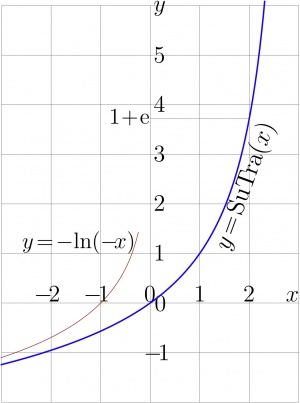 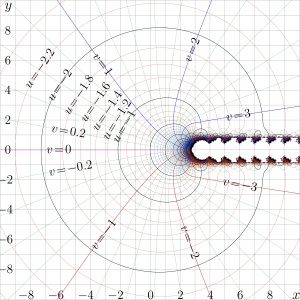 The Trappmann function is treated as the transfer function; and the SuTra function, as superfunction of tra, satisfies the transfer equation

In orfer to narrow the set of solutions, it is assumed, that

and that SuTra is entire function. Also, the logarithmic asymptotic bahavior at infinity is assumed, at least outside the strip

However, the superfunction of the Trappmann function, id est, SuTra can be expressed through that of the function zex, $~\mathrm{zex}(z)=\mathrm{ArcLambertW}(z)=z\,\exp(z)$, in the following way:

at least for $z$ outside the strip (3). Perhaps, the similar representation could be used also for values inside that strip with appropriate choice of branch of the logarithmic function. Practically, it is easier to use the transfer equation (1) recurrently, bringing the argument of SuTra to the range there the representation (4) is valid. In such a way function SuTra is implemented in the C++ algorithm SuTra.cin for plotting of the complex map in Figure 1.

Iteration of the Trappmann function

where AuTra$\,=\!\mathrm{SuTra}^{-1}$ is the Abel function for the Trappmann function; the number $n$ of iteration in expression (5) has no need to be integer. As usually, the superfunction can be iterated any real (can even complex) number of times.

In certain range of values of the argument, and, in particular, along the real axis, The Abel–Trappmann function AuTra can be expressed through the Abel function of zex, id est, through AuZex in the following way:

Representations (6) and (5) are used to plot graphics of the non–integer iterates of the Trappmann function.