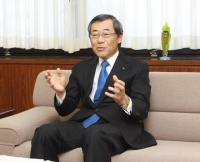 TEPCO, or Tokyo Electric Power Company is the biggest electric company in Japan that owns several nuclear plants. For June 2011, the president of the company is Toshio Nishizawa [2].

TEPCO become famous after the gradual infolding or the Fukushima disaster since rank 4 to rank 7 in the spring of 2011. With that disaster, TEPCO set the world's absolute record of the financial losses [3] and cannot pay the compensations without the help from the Japanese government [4]. The sum or reparation is difficult to estimate, it may count of order of 100 bullion dollars, id est, from \)10^{11}\( to \)10^{14}\( dollars.

Under the handling by Masataka Shimizu (President of TEPCO), Akio Komori (Managing Director of TEPCO) and then also Kan Naoto (prime minister of Japan), the Fukushima disaster unfolded and developed since rank 4 to rank 7 in 2011 [5][6][7]. The absence of President at Fukushima and the attempts to hide the information might be among various causes of the developing of the disaster since level 4 to level 7. Similar sabotage took place in the USSR at the Chernobyl disaster: that time, during several days since the reactor explosion, the soviet veterans did not even announce the disaster; first, the large scale emission of unstable isotopes by the exploded reactor was discovered by the observers in the Western Europe.

See the special article Fukushima disaster for the details.

Perhaps, the unfolding of the catastrophe resulted not only from the sabotage of the TEPCO managers, but also from the design of the TEPCO reactors, which cannot resist the earthquakes and tsunamis, typical for Japan. At the break of the cooling system, even after the shutting down the chain reaction, the decay heat is sufficient to vaporize into the atmosphere all the nuclear fuel. In this sense, the capacities of TEPCO would be sufficient to provide the disaster of rank 8 or 9, making the most of the Honshu island inhabitable, exceeding the damage of Japan during the World War 2 and approaching the scale of disaster described by Sakyo Komatsu in 1976 [8].

After the Chernobyl disaster, the laureate of the Nobel award Andrew Sakharov declared, that the on–ground reactors are dangerous and should be prohibited by the international law [9]. However, up to year 2011, no such a prohibition takes place, and the most of reactors are built at the level of ground (this is most economical solution). The TEPCO reactors are not exception.

The new administration of TEPCO is announced in the summer of 2011 by the TEPCO bulletin [10]. Neither confiscation, not nationalization of TEPCO is planned; the governmental plan by Kan Naoto intents to save TEPCO from the bankruptcy [11].