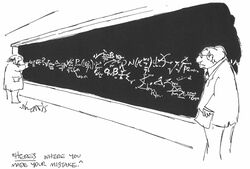 Better late than never [4]:
"Here's where you made your mistake!"

Some "popular" articles contain statements
(1) "Scientists have shown, that .." or
(2) "Scientists have found, that ..", or even
(3) "The science had proven, that.."
instead of link to the original publication.
Often, the declaration, that follows such a statement, is wrong. This seems to be unavoidable; the journalists do not know, what science is. (How many physicians know physics?)

However, If one believes, that some statement still refers to science, the prefix of kind (1)-(3) can be replaced to the specific link, for example,

The comparison of the TORI religion with other religions is difficult, if at al. If the scientific methods, id est, the TORI axioms, were used for the comparison of various religions, then it should be easy to demonstrate the priority and efficiency of TORI. The analysis from the point of view of some "objective truth" may be methodologically incorrectl, in the same way, as if someone would try to describe the Aristotle's logics using methods of the female logic[6].

However, the proof of some method, based on the same method, does not worth much. For this reason, here, the TORI axioms are just postulated and suggested to the international (and, especially, scientific) community as the philosophic criterion. The Editor considers this criterion to be very efficient and important.