From TORI
(Redirected from Molotov cocкtail)
Jump to: navigation, search 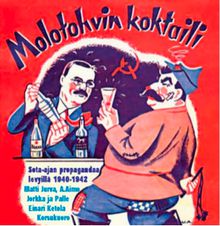 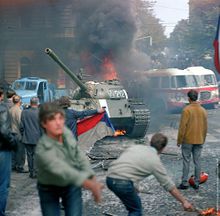 Molotov cocktail (Коктейль Молотова) is self-made weapon, consisting on a bottle with a flamable liquid tapped with some permeable plug, that is lighted and launched into the enemy.

The Molotov cocktail is named after the Soviet veteran Viacheslav Molotov, who had raised the World War 2 with his famous Molotov-Ribbentrop pact in 1939. The Molotov cocktail was used to stop the Soviet invasion into Finland. According to the Soviet Legend, the Russian troop were expected to come to Finland as liberators of the Finnish people from capitalism. So, some Russian soldiers and officers could expect to get some tasty drink there.

However, the Soviet occupants met the heroic resistance of the Finnish people, especially at the Mannerheim Line. Finland is orders of magnitude smaller, that the USSR, and the Finnish army suffer of shortage of bomb, guns and missiles. Then, the Molotov Cocktail is used against the Molotov's "liberators". Many Soviet occupants were killed there, and some of them – with the Molotov cocktail.

Then, the Molotov cocktail were used in the second part of the World War 2, since Stalin and Hitler become enemies, as the mass corruption and sabotage in the Soviet Army led some soldiers without ammunition, and they had to use the Molotov cocktail instead of grenades.

Efficiency of the Molotov Cocktail, compared to the ant-tank missiles (panzerschreck) is law.

The Molotov cocktail was used by the Czech patriots in 1968 against the Soviet troops during the Soviet invasion into Czekhoslovakia. Due to the low efficiency of the Molotov Cocktail against tanks and machine guns, the defenders were defeated, and Czechoslovakia remained the colony of the USSR almost until its collapse in 1990s.

The Molotov cocktail, combined with other self-made weapon happened to be efficient agains the Putin's occupants, who invaded Ukraine since 2014 February (See Russian invasion into Ukraine), because that time Putin did not want to reveal the invasion, and the number of terrorists he sent was small compared to the protesters who rise the riot against the corruption (See article Euromaidan). After recovery of the Ukrainian army, the Molotov Cocktail is almost not used, Question about the delivery of the American anti-tank missiles to the Ukrainian army is under discussion at least in year 2014.