Difference between revisions of "Ancient migration" 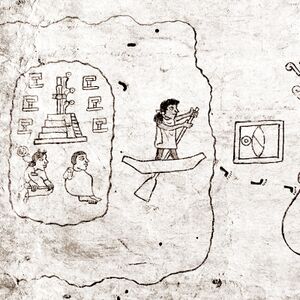 Ancient migration refers to transfer of Humankind from Eden (Africa and Mesopotamia) to Europe, Asia, Australia and America.

The idea comes from the picture about origin of Maya, first picture of the Codex_Boturini[1]

The migration could be caused by the Arizona meteorite [2].

The Maya scriptures can be interpreted as evidence, that some people come from some prosper land to America by boat, then by walking, and told the story to the decedents.

the Bible (Genesis) tells about some disaster (horrible flooding) that caused significant changes in the Human demography.

The fall of the Arizona meteorite [2] can be interpreted as trigger that caused significant changes in the climate of the Earth.

Many authors suggest maps, indicating migration of the people from Asia to America, either by water (Pacific Ocean) or by the Bering Isthmus, that had been at the place of Bering Strait that time. Few examples of such maps are suggested below. 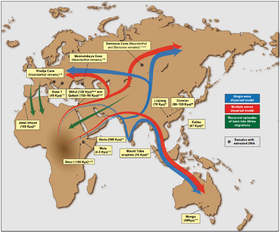 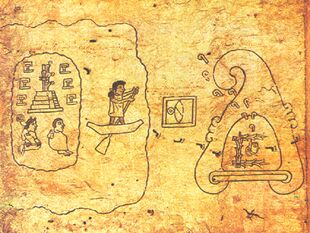 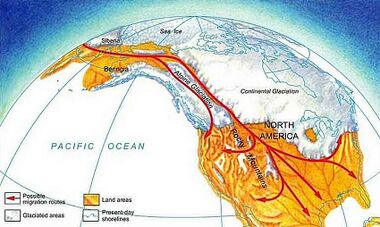 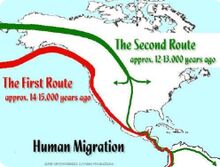 https://www.lpi.usra.edu/science/kring/epo_web/impact_cratering/enviropages/Barringer/barringerstartpage.html // Forty-nine thousand years ago, a large 30 to 50 meter diameter iron asteroid impacted the Colorado Plateau in northern Arizona. The resulting massive explosion excavated 175 million tons of rock, forming a crater nearly a mile wide and 570 feet deep. (Click here to learn about the geology of the region). While the Meteor Crater* impact event was too small to cause global environmental effects, its regional damage would have been significant. // Reconstructing the environment at the time of the impact is important to understanding the context of the devastation. Palynological (fossil pollen) and paleontolgical studies have provided a partial record of the paleoenvironment including the flora (vegetation) and fauna (animals) that lived in the region ~50,000 years ago. // The current data suggests that a juniper-pinyon woodland or forest covered the gently rolling countryside. Large mammals such as mammoths, large ground sloths, bison, camels, tapirs and horses may have lived in the vicinity and been victims of the 20 to 40 megaton blast. // The damage inflicted by the impact was similar to a nuclear bomb blast, but without ionizing radiation damage. The asteroid, bedrock, and any fauna or flora at ground zero would have been vaporized. Bedrock was ejected and overturned out to a distance of 1-2 km (see graphic). The explosive shockwave would have produced winds in excess of 1000 km/hr within 3 to 5 km of the impact (see effects map). These winds would have stripped away grass near the crater and flattened juniper and pinyon trees out to a radial distance of ~14 to 19 km. // The impact shock wave would also have had severe effects on animals in the region. Dramatic differences in the internal vs. external pressures exerted on animal bodies within the shock wave would have caused hemorrhaging (internal bleeding) and edema. Animals would also have been injured by displacement, their bodies propelled a short distance by the shock wave. // Branches, rocks, and other debris was also accelerated by the blast, causing shrapnel-type wounds out to a distance of 10 to 13 km. Vegetation and animals may also have been subject to the thermal emission from the blast, causing burn damage out to a maximum range of ~10km. This intense heat may have started forest fires or range fires, although no fire evidence has been reported. // The probable sum of these effects is the destruction of vegetation over an area 800 to 1500 km2. Damage to vegetation would have extended over an additional 200 to 600km2. Animals within 3 to 4 km of the impact site would probably been killed, with maiming injuries extending out to distances of ~16 to 24 km. While these effects are severe, they are confined to the immediate region and did not cause extinctions. In fact, the newly formed bowl shaped depression soon filled with water providing a lake habitat (see graphic) for aquatic plants and animals. Recolonization of the area was probably accomplished in a few to ~100 years. // These types of events, however, are large enough to destroy a modern city. They occur at an average rate of about once in 6000 years. //