Difference between revisions of "HemulationE" 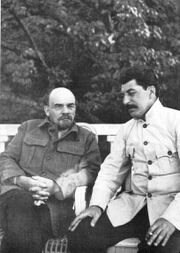 HemulationE is English version of historic emulation about the USSR. There is also Russian version HemulationR.

The name for this article is created as abbreviation of words "Historic Emulations". Also, there is analogy with Hemulens described in stories about Moomintroll by Tove Jansson. [3] Hemulens seem to be essence of scientists, and they look as nudniks [4]. For many Russian, the researchers, who dig the history of Russia, are also nudniks.

Obviously, the communistic labour relations do not work. They cause only famine, cannibalism, robbery, banditism and all other kinds of crime. We may plunder the food from farmers once or twice; but then, there will be no farmers, they disappear.

We need to recover, restore the capitalistic commodity-money system. It is only way to save Russia from chaos, that already came and continue progressing. Over-vice, the most of population of the USSR will die..

However, we cannot yet say to our comrades, that we just go back. The restoration of capitalism should be declared as temporary, just to recover the socialistic system of production.. So, it should not be named as capitalism. The new word, euphemism should be invented. For example, "New Economic Policy", why not? It can be abbreviated to NEP, "НЭП".

After to recover some stability, we may think, how to justify it. Perhaps, we should gradually remove from the Central Committee the most brutal functionaries, who consider the terror as the main method of handling of the country. I mean, first of all, Stalin and Trotski. But also Dserjinski, Budenny, Voikov, Frunze.. This require the special care and delicacy. Perhaps, we should use conflict between Stalin and Trotski..

Unfortunately, nobody in the Central Committee can be considered as a honest person. This is unavoidable result of any revolution: The Revolution cannot be done in white gloves. 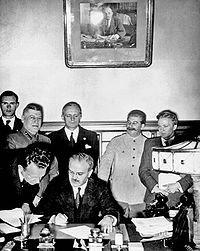 Ado, gear, how do you do? ..
Does your translator translate? ..
That is good that he translates. Say him, let him translate lauder. ..
One says, that you have all the things ready. ..
Churchill says. Zorge says. Many observers confirm. ..
How "which Zorge?", there is only one Zorge! ..
I repeat: Zero. Orenburg, Revolution. Grenoble. Electricity. Do you understand? ..
Hence, ask Hirohito. He knows. If he does not know yet, he will know very soon. ..
Well, Ado, I call about another thing.. At Neva, we still have 10 cargo trains with cereal. ..
That is good that you know. The last one will cross the demarcation line at 4am. ..
Well; so, do not begin before 4am, do you understand? Over-vise, you may miss some grain. ..
That is good, that you understand. Until 4, I shut up my men, no provocations. ..
Very good. By, my dear. See you.

- Very good. The ambulance trains demoralize... But not all, nobody will believe that there are no injured soldiers. One train per month will be sufficient. Let the people see, that we care about heroes. All others to burry. Quickly! All together. Mass graves.

- And if anybody returns, break-through the cut-off?

- And if the soldiers will refuse to execute the compatriots?

- Then I shout them by myself!

- That's good... You have a good plan, comrade Zhukov!.. It will be good educative lesson... Nobody will escape!

Zhukov was in rigor.

- Do not afraid, comrade Zhukov. This does not apply to you... while you comport well...

- How shall we explain this at the Council?

- Normally. You will explain. Do not afraid, comrade Zhukov. If any doubts, we remove the wrong persons. Do not worry, comrade!. Bye-bye!.

- Much stronger, comrade Stalin. As thousands of Hiroshima's.

- This will be REALLY much stronger.

- Do you think it would be sufficient for a big city, say, like Moscow?

- How about the suburban?

- Do you think it would reach, say, Caucasus?

- Not, comrade Stalin. Yet, not so powerful. May be, within 10 years, we'll be able to destroy a continent, but not yet.

The question about Moscow worried Beria. At home, he opened the map. With ruler, Beria measured the distance from his residence to Moscow. The residence was well within striking area. ..

A gang of four - Malenkov, Khrushchev, Bulganin and Beria. Gathered outside the city. Let's go to the woods for a walk. (One does not discuss this indoors) One said that Stalin is a great leader and teacher. In a circle, everyone repeated it. But the latter said that it was difficult for him, Stalin. And over the years, the more difficult:
- Yes, his age.
- Yes, age, shit ...
- Age, .. his mother! ..
- Well, comrades; think: what to do if he becomes absolutely bad ...
- Should we send him to rest at Solovki?

The last is a brilliant move by Nikita, who always tried to look as a full.
Beria does not reveal the Khrushchev's trick and falls into the trap:
- From there, he will be released by the Chinese, as solidarity. Or by the Americans, because of curiosity.

The trap slammed shut, and Nikita signed the death sentence to Stalin (as well as to Beria):
- Lavrenty, we do not understand anything in these matters. You may play this card. 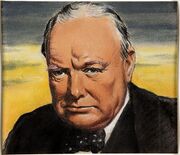 We should avoid a conflict with Russians..

No! You misinterpret me. The USSR was and remains our enemy. Anytime we should be ready to handle their aggression..

Well, I explain.
Actions by Russians are not predictable. But the general trend is clear and allows simple forecast.
Bolsheviks killed their farmers with hunger. They flooded the fertile lands, to make the hydroelectric power plants. Regions of agriculture are polluted with the nuclear industry. Russians have low density of population, but they contaminated their fields so heavily, that they have to buy grain. I thought that I will die of old age, but now I know that I will die of laughter.
Stalin grabbed the agrarian country and turned it into a concentration camp and nuclear dump. Lenin could get Russians out from the swamp, where he brought them. But they poisoned Lenin.
After a couple of generations, Russians will degrade even more; they will not be able to explore even the mineral deposits; they'll have to invite workers from China for this. People will die, and the "nomenclature" and their servants will buy from us the luxury and other goods, selling the concessions. For the communist leaders, this is most profitable business. ..

Yes. While we can prevent new military aggression from Russia, in the interests of the UK (and other Western countries) is to preserve the USSR as long as possible: it is source of cheap raw materials and a good market to dump the poor quality products. Russians destroy cybernetics and genetics - this is good for us; we'll sell to the USSR the seeds and the electronic devices. In addition, for a symbolic fee, we'll deposit at Russia the nuclear waste..

Yes. Whe have no goal to destroy the USSR. It is so senseless, as a goal to melt an iceberg drifting toward a tropical sea. We must remember that it exist and do not hit it with a passenger liner; then the iceberg is not so dangerous.
As we stop the Soviet expansion, the Soviets will destroy themselves without any effort from our side. We'll buy the leaders of the Soviet veterans, and they'll buy from us the rope to hung each other.

Georg Orwell? .. Wow.. I do not know, whether the USSR will exist until 1984 or not; but in century 21st, there will be no Soviet Union. There will be wild tribes fighting each other.

Yes. With nuclear weapons. Upper Volta with missiles. I do not know whether the Russians will use such weapons in their internal conflicts, but we should prevent them from using it against civilized countries. We can do this and we'll do this..

Yes, I agree. I would not sell to these barbarians any weapon more serious than a rope and stick.