Difference between revisions of "Upper Volta with missiles" 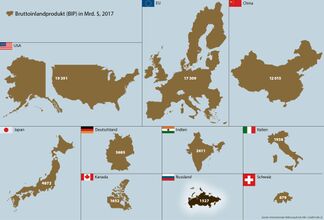 Upper Volta with missiles (Obervolta mit Atomraketen) is qualification of the USSR, that indicates combination of moderate level of military technology (there are some missiles and some nuclear bombs) and very poor living level of population, high level of corruption and degradation of nation to mentality of animals, especially among the soviet administration.

Such a qualification of the USSR is attributed to various authors.
No original publication with such a quite is detected.

Publications about the Soviet period appear and disappear in the internet. In order to provide some stability, some of them are copypasted here.

I notice that the phrase "Upper Volta with rockets" has popped up a few times recently in DJL, with occasional passing discussion as to its origins. Henry Kissinger, Helmut Schmidt and even Mikhail Gorbachev have been cited as the phrase's inventor.

Sorry, but it was I who first put it into public print. It was in the summer of 1987, I think, when I was the correspondent in Moscow (1986-89) for The Daily Telegraph (London) and The Sunday Telegraph. The phrase caused some enjoyable offence at the time, and I was castigated for my "rabid anti-Sovietism" etc in the Soviet press.

In fact, I had previously heard a thought expressed rather similarly by a non-journalist woman who happened to be a Zimbabwean, and I thought I'd play with it. Bad luck that the Upper Voltans had actually been calling their country Burkina Faso for quite some time. But poor Upper Volta had a more hopeless and comic ring to it.

Anyway, I don't see why the aforementioned bigwigs should get the credit for it, if credit it is! 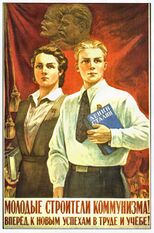 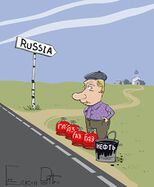 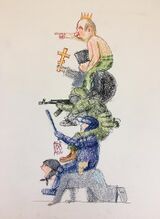 Staunton, February 28 – Twenty-five years ago, German Chancellor Helmut Schmidt characterized the Soviet Union as being an “Upper Volta with missiles.” Now, Russian analysts, in response to findings of a Swiss firm, have suggested that a better analogy might be between the Russian Federation and a “Nigeria with snow.”

The three differences between these declarations tell a great deal about the path that Russia has followed over the last generation. In the earlier time, the analogy was made by a Western political leader, horrified Soviet citizens, and suggested that Russia’s military strength was the thing that set it apart from a much weaker country.

Now, the analogy is being made by Russian analysts, horrifies Western business interests, and suggests that it is precisely Russia’s similarity with Nigeria on a wide range of economic and political measures including corruption and government inefficiency that is the heart of the matter and cannot be obscured by snow.

In an article posted yesterday on the “Svobodnaya pressa” site and entitled “Nigeria in the Snow,” commentator Andrey Polunin said that in the view of foreign investors as expressed in a report by the Swiss Coca-Cola HBC, “Russia stands closest of all to … Nigeria” becaue of the nature of its political and economic system (svpressa.ru/society/article/64866/).

(That this analogy is now widespread in Moscow is suggested by the simultaneous appearance of another article, this one by Petr Svoekoshtny on the Polit.ru portal entitled “Northern Nigeria” (polit.ru/article/2013/02/27/russia/).)

According to Polunin, the Coca-Cola HBC report makes five basic points. First, for Russia as for Nigeria, state policy is inconsistent and thus makes investing more risky. Second, the legal systems of the two countries are poorly articulated. Third, like Nigeria,Russia has too many different government players for any company to know whose decision will stick.

Fourth, both countries “historically have very high levels of corruption,” something that makes it difficult for US firms, restrained as they are by anti-corruption laws, to operate. And fifth, the lack of clarity in the legal systems of the two countries makes it difficult to calculate profitability and thus determine whether an investment is wise or not

These conclusions are hardly original, Polunin points out. But they underscore the reality that “the third presidential term of Vladimir Putin – more precisely, the political protests and growth of tensions connected with it – have made Russia ever more like Nigeria in the eyes of foreigners.”

“Svobodnaya pressa” appends a table comparing Russia and Nigeria in 2007 across a large number of indicators to underscore that even then “the basic social-economic indicators of Russia and Nigeria were very close.” Apparently, the article implies and the Western analysts suggest, they have become still closer in the intervening years.

Polunin asked two Russian commentators for their reactions, Valery Solovey, an MGIMO professor who heads the New Force Party, and Ruslan Khasbulatov, a professor at the Russian Economic University and the former chairman of the Supreme Soviet of the Russian Federation.

Solovey said that the Coca-Cola HBC assessment “corresponds to the general assessment of the overwhelming share of Russian economists” The situation is “not simply bad; it is getting worse” because of the Russian government’s policies. “Unfortunately,” he said, “everything” that the Western risk assessment report found “is pure truth.”

The factors it identifies make it extremely likely that Russia “is now at the first stage” of serious political unrest, with a new round of protests likely to emerge and on “a new basis, not political protest against dishonest elections but of social-economic dissatisfaction.” That will make the protests broader and larger.

In addition, increasing immigration “pressure” is viewed by many Russians as the reason their lives are not getting better, and the influx of North Caucasians into the southern part of Russia is affecting social and political attitudes there. Over the next year, Solovey suggested, these various factors are likely to come together.

The outflow of Russian capital is also likely to continue “and even increase” for the reasons the report listed. And that will only make the situation worse for ordinary Russians, the New Force Party leader said.

Khasbulatov, in contrast, said it was “madness” to compare Nigeria with Russia. Instead, he suggested, one should see this report and this comparison as part of a general pattern of Western opposition to continued investment in the Russian Federation, opposition that was reflected most recently in statements by George Soros at Davos in January.

Nonetheless, he conceded that there are “enormous” problems with the Russian economy, and he argued that they were largely of Moscow’s own making. Relying on gas and oil exports alone, as the Putin regime has done, “is a sign of a colonial economy,” and it puts Russia at serious risk when prices fall. “The faith of the Kremlin that prices for oil will be high eternally stupefies me,” Khasbulatov continued.

If the influx of petro-dollars falls, he argued, this will force the government and business to cut pay, social programs and pensions. And when that happens, people will go out in the streets not just in Moscow but throughout the country. Clearly, the Kremlin does not understand this or how to avoid it.

The majority of Russians are disappointed and distrustful of those in power. “Russian society does not trust anyone, not Putin or the government.” Indeed, Khasbulatov suggested, “today the real level of trust in political leaders is comparable to the level of trust in [former Russian President Boris] Yeltsin in 1996.”

“In other words, it is catastrophically low.” That is “pushing Russia to instability,” something foreign analysts fear and is driving them to suggest, as Coca-Cola HBS has, that Russia today has become “a Nigeria with snow.”

https://en.wikipedia.org/wiki/Republic_of_Upper_Volta The Republic of Upper Volta (French: République de Haute-Volta), now Burkina Faso, was a landlocked West African country established on December 11, 1958, as a self-governing colony within the French Community.[1][2] Before attaining autonomy it had been French Upper Volta and part of the French Union. On August 5, 1960, it attained full independence from France.[3] On August 4, 1984, it changed its name to Burkina Faso.