From TORI
(Redirected from Bolshevick)
Jump to: navigation, search

Bolshevism Большевизм is most radical form of fascism developed and realised by Vladimir Lenin in years 1917-1918 in Russia and nearby countries; during the civil war, the bolshevick's troops had occupied wide territories and established the slavery–style dictatorship, called the USSR.

Bolshevicks had declared the ideas of communism that was expected to be realised, first, for year 1940, and then, after the World War 2, for year 1980. Each time bolshevicks used to provoke a war in order to distract the population of the USSR from the comparison of declarations to the reality.

In century 21, Bolshevism accept some ideas of the Russian orthodox church, creating new form of fascism and satanism 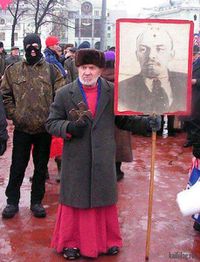