What Obama said to Putin

From TORI
(Redirected from Dialog of Obama and Putin)
Jump to: navigation, search 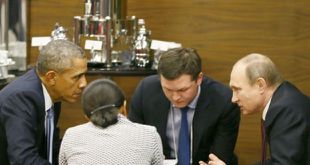 What Obama said to Putin (Что Обама сказал Путину) is emulation of speech that seem to take place 2015.11.15, but had not been published at the official sites [2].

1. Those bank accounts in question, can be unfrozen only by the US Justice Department. I briefly looked at the materials, and I do not think they will ever be unfrozen. Moreover, there is an active investigation, leading directly to you, Mr Putin.

2. If the Minsk agreement will not be fulfilled by 31 December 2015 and the Ukrainian-Russian border will not pass under the control of Kiev and Moscow, respectively, expect new sanctions, and not just from the US but also by the EU.

3. We have evidences of the presence of Russian troops in the east of Ukraine, and you need to withdraw these troops immediately. These evidences will be used against you, Mr Putin, and against the Russian Federation in international courts. The continuation of their criminal activities at the territory of Ukraine is considered by the United States as international terrorism, and the their remaining there will only aggravate the accusation.

4. I'm familiar with a preliminary version of the second report on the MH17, which will be published in a few months. The report could lead to an international arrest warrant, not only Mr. Girkin, but you, Mr Putin, as well as Messrs Shoigu, Matvienko, and the list goes on.

5. I say again: The USA and our NATO allies will never be intimidated by your nuclear blackmail, Mr Putin. I repeat again: You and the Russian Federation in your face no longer dare to blackmail the world with your nuclear weapons. Do you understand me.

The Russian version of the text above is from http://www.szona.org/chto-obama-skazal-putinu/ [3].

Slava Rabinovich is copright owner of the Russian original of the text. At the use, please, indicate the author and the source.

2015.11.14. http://www.theguardian.com/commentisfree/2015/nov/14/republican-presidential-candidates-would-jump-straight-into-war-with-russia-trump-carson Trevor Timm. Republican presidential candidates would jump straight into war with Russia. Saturday 14 November 2015 11.45 GMT. Republicans are now openly campaigning on the fact that they want to shoot down Russian planes over Syria, and seem to be trying to out tough-guy each other for who would be willing to start World War III the quickest. // At least that’s what it sounds like from their comments in the past week, where most of them have stepped up their advocacy of a no-fly zone (and ground troops) in Syria while bragging that they have no problem shooting down Russian fighter jets to enforce it.

2015.11.15. http://www.nytimes.com/live/paris-attacks-live-updates/obama-and-putin-meet-at-g-20-summit/ Michael D. Shear. Obama and Putin Meet at G-20 Summit. Sun Nov 15 2015 19:21:56 GMT+0900 (JST).President Obama and President Vladimir V. Putin of Russia spoke face to face at the Group of 20 summit meeting here on Sunday, sitting across from each other on a pair of couches during a reception for world leaders on the gathering’s first day. Officials for the two governments did not say what was discussed, but the scene was captured by a closed-circuit television camera and shown to reporters in a nearby hotel. ..

2015.11.16. http://www.cnbc.com/2015/11/16/obama-putin-go-head-to-head-on-g-20-sidelines.html Obama, Putin Go Head to Head on G-20 Sidelines. Russian President Vladimir Putin and U.S. President Barack Obama talked to each other for more than 30 minutes in an informal meeting on the sidelines of the Group of 20 summit in Turkey on Sunday. The presidents and two associates could be seen in an intense huddle in a group of chairs around a coffee table on the sidelines of the meeting of international heads of state. "On Ukraine, President Obama reiterated his support for the full implementation of the Minsk agreements, including the withdrawal of heavy weapons, the removal of all foreign fighters, the release of hostages, and the return of the Ukrainian side of the international border to Government of Ukraine control," said the official. "Finally, President Obama offered his deep condolences for the loss of Russian life stemming from last month's MetroJet crash." Putin and Obama talked "extensively," Russian news agencies cited top Kremlin foreign policy adviser Yuri Ushakov as saying.