No file by this name exists. 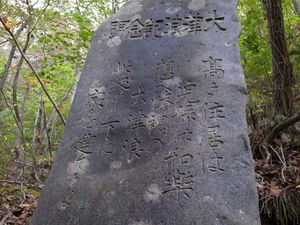 Tsunami Warning Stone or Tsunami stone may refer to a stone monument that indicates the highest level of other reached at tsunami, in order to warn the future generations.

Beware of tsunami. Do not build homes below this level.

However, this is only guess, as the original text written in the stone is not typed.

However, usually, the authors do not provide the most important indofmation about the stones shown in their pictures:

1. The authors do not type the original text written in the stones

2. The authors to not indicate the coordinates of the place, where the Tsunami Warning Stone is located.

These two observation repeat in many publications and can be considered as surely observed phenomenon.

Origin of this phenomenon can be subject of the scientific research. It is difficult to guess a honest reason, why an author (or the censor) would omit the most important information from the description of the image/

There are no pages that link to this file.