From Chernobyl to Fukushima

From Chernobyl to Fukushima by Dmitrii Kouznetsov, May 2011.

Abstract. The map of contamination after the Fukushima disaster in Japan (2011 March) is compared to that after the Chernobyl disaster (1986 and lasts) in Europe. The stopping of the Hamaoka nuclear power plant in May 2011 is mentioned. Ways of development of nuclear energetics are discussed.

Many authors compare the Chernobyl disaster and the Fukushima disaster basing on the declarations of specialists. Since this month, everyone may form his/her own opinion just looking at the maps below. They are not brought into the same scale of levels of contamination. (Would I have access to the primary data, I would plot them in a similar manner.) But both maps are in the same scale in the sense of zooming. 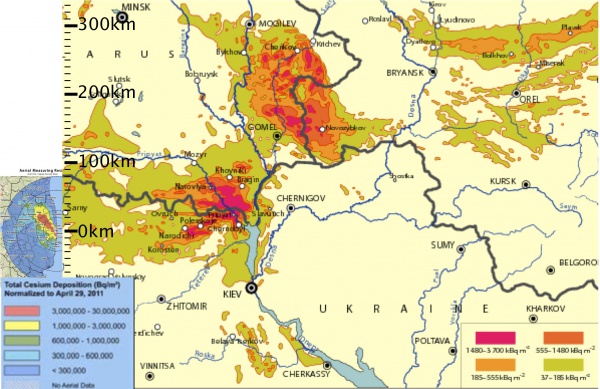 The map above is collage of the part of figure II of the report [1] about the Chernobyl disaster at right and the map of the fallout after the Fukushima from the MEXT publication [2] at left; the figures are zoomed to the same scale and this scale is added. The data used to plot the fugues are not available; so, I did not change the color encoding scheme for the surface density of the contaminants; roughly, he yellow and red at the left corresponds to the two versions of red at right.

The right hand side map corresponds to the year 1998, twelve years after the explosion and burning-up of the reactor at Chernobyl. This map lated for quater-century with the publication.

Qualitatively the comparison of maps confirms the already discussed estimate that the fallout due to the Fukushima disaster is still smaller than due to the Chernobyl one; although the similar map for the rest of Honshu is not yet available, and the spots similar to those after chernobyl may appear somewhere else. On the other hand, if the main contaminant after Fukushima is unstable cesium, then its salts are highly soluble in water, and significant part of it may be washed out due to the rains; then, after two years, the contamination may significantly reduce. On the comparison of such maps, the Mainichi writers conclude that the contamination due to Fukushima is of order of 10\(\times\) of that due to the Chernobyl [3]. Unfortunately, the data of contamination for year 1986 are not available, perhaps, due to the sabotage by the soviet veterans; one may expect, in 1986, the contamination was much stronger (due to the isotopes of Cesium). But even the shown map makes the general impression, that the melt-down of a reactor into the ground is still much better than its burning-up into the atmosphere.

If the colleagues who have access to the primary data about the Fukushima disaster read this article, they may consider to plot the map of contamination in the same style, as it is plotted for Chernobyl: wide area covered (to reveal the additional spots if any) the same levels should be drawn, and the same color encoding should be used. This would even simplify the comparison.

After the release of the preliminary versions of the map of contamination, the "Hamaoka" nuclar plant was stopped for the safety reasons: if a similar earthquake comes again in vicinity of the Hamaoka, then, it might explode in a way similar to that the reactor at Fukushima Daichi did (or even worce) [4][5].

The meteorological programs get data from barometer, thermometers, anemometers, hygrometers, etc; and they plot isotherms, isobars and other staff, and these maps are available online every day. In the similar way, the same computers could get data from the Geiger counters and plot the maps of isolines of density of the ionizing radiation.

Also, I believe, the design of the nuclear reactors should not imply the heroic efforts of the suicide workers at the failure of the cooling system. I think, the only way to realize a safe nuclear plant is to mount all the reactors below the level of sea water, in order to allow their passive cooling even in a case of total destruction of the plant's equipment. This idea is not mine[6], and it is not new: it had to be realized in the past century. But late is better than never.

The events after the explosions and melting down of the reactors at Fukushima plant confirm, that the information service does not yet correspond to the needs of the modern technology (and its dangers): the map shown at right lated for a quarter century; that shown at left lated for two months. Such a delay would be normal in the epoch of Meiji (before the telephones and cars), but not - in the century 21, when the Geiger counters, computers and internet are already invented and improved. In this case, it may have sense to develop the information technologies first, and only then – the nuclear energetics.

The appropriate first step would be service of acquisition of data on the ionizing radiation at the existing meteorological stations. The automatic collection of such data and plotting of the isolines of the counting rate of ionizing particles is necessary step at the development of the nuclear energetics. If such a service does not work in periods of normal functioning of all nuclear plants, there is no hopes that it will serve as follows in the case of any accident.

In few words: First – the safe and default monitoring of the radiological situation in all the country. This information should be avaliable to everybody, from Big Oki Tenno Sensei to small Chiiisai Wakame Chan. Then - safe nuclear power. Not vice versa.