Gulliver and Lilliput are terms used to denote somebody big and somebody small, respectively. The Origin of these term is usually attributed to Jonathan Swift.

The figures below indicate Gulliver, looking at the tree, that grows at the edge of a big rock, and Lilliput, following a narrow trail in the forrest. 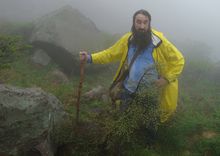 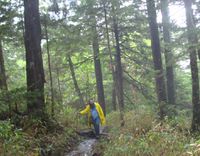 However, one may also say, that there is the same Gulliver at the pictures, with the same yellow raincoat and the same stick. This is also correct description; then we should interpret the first image as Gulliver in Lilliput, and the second – as the same Gulliver in Brobdingnag. The modern interpretation of the story by Swift is not yet ready, but at least two pictures for it are already loaded.