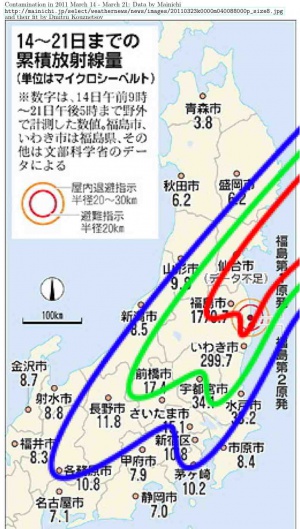 Sorry for the language, the urgency of the topic forces me to communicate You before I get sufficient skills to write in Japanese. This letter is about the Fukushima nuclear disaster.

I follow the news and from day to day the analogy with the Chernobyl catastrophe (26 April 1986, USSR) becomes stronger. The most warning is the observation that the map of the radioactive fallout is not available in the internet. Such a map was hidden from the population of the Soviet Union in the case of the Chernobyl accident too; the hiding of such an information may be one of factors that had predetermined the depopulation and decay of the Soviet Union. I would not like Japan to follow such a bad example.

The distribution of the level of ionizing radiation is supposed to be carefully measured, especially in the populated areas. As in the case of the Chernobyl disaster, the results seem to be kept in a secret. I see no reason for the Japanese officials to repeat the errors of the soviet veterans that en fin led to the disintegration of the Soviet Union. The immediate public release of the map based on such measurement is extremely important to help people to make the appropriate decision about the evacuation: who should leave, and which place is safe enough for the evacuation. The indication of the rough estimates of circular zones of radius 20 km and 30 km may serve as a preliminary estimate; but as final recommendation, such a rough estimate does not correspond to the modern level of the Japanese science and technology and sincerity.

The maps of the contamination level, related to this accident, I could found are
http://4.bp.blogspot.com/-Rs5XPVkAC2U/TXuOqCs-L6I/AAAAAAAAAJc/rUv3jrrgVJ4/s1600/9dd863d106538b8d.jpg
http://www.infiniteunknown.net/wp-content/uploads/2011/03/US-NRC-Japan-Fallout-Map-From-Destroyed-Fukushima-Daiichi-Nuclear-Plant.jpg
and I would qualify both of them (softly speaking) as non-professional. The official publication, with detailed map, covering the territory of Japan, and especially the North-East area, is necessary.

Now You have an opportunity to show to the Japanese nation, to the foreign residents of Japan, and also to the whole World that your position and your personality allow to make significant efforts necessary for the survival and prosperity of Japan. I beg you, use all Your popularity to convince the authorities to publish such an urgent and important information, the detailed map of the fallout.

Several similar messages were sent and uploaded also to various sites of the Japanese Government. At least one of them had been acknowledged in the following way


The same month, at Mainichi, the some sparse data appeared at http://mainichi.jp/select/shakai/ those data were used to make the double-trace fit plotted in figure at the top. For year 2012, the content of that page changed, the date are no nore available at the original site. But in the same year, since 2011 June, the detailed map became available at http://www.nnistar.com/gmap/fukushima.html confirming the double-trce fit.

Since 2012, the advanced map appears, http://jciv.iidj.net/map/ However, the independent check and verification of data by that map should be appreciated.