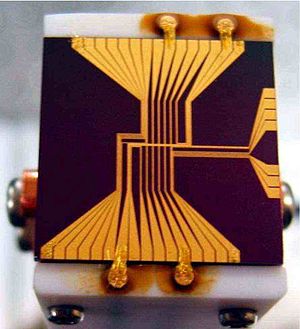 First microchip trap made in ILS in 2005

The magnetic traps were suggested in 1983 by David Pritchard [1] and realized by A.L.Migdall,J.V.Prodan,W.D.Phillips,T.H.Bergeman and H.J.Metcalf in 1985 [2].

The cooling of the trapped atoms to the BEC was confirmed by various groups [5][6].

The cold trapped atoms could be a basic element of a quantum logics (aiming creation of a quantum computer)), under condition that the traps have no need to be manufactured individually and can be realized as a small ships (in a way, the memory elements of conventional computers are manufactured). The first chip atomic trap is reported in 2006 by M.Horikoshi and K.Nakagawa [7]. Although such a device still has sizes of few centimeters, not microns, at the slang it is called "microchip trap". It is shown in the top-right figure.

Let an atoms has a magnetic moment \(\vec{\mu}\); then, the energy of its interaction with a magnetic field \(\vec{B}\) can be expressed as follows: \[\Delta E = - \vec{\mu} \cdot \vec{B}\]. The magnetic moment is aligned with the spin and quantized; in the representation of energies, it takes on one of certain discrete values. Roughly, in a strong magnetic field, its magnetic moments aligned with the field. Dependently on the projection of the spin on the magnetic field, the potential energy of atom increase or decrease, dependently on the strength of the field. Some of atoms are attracted to the region with strong magnetic field, they are qualified as strong-field-seeking, while other are repulsed from those regions, and they are called low-field-seeking.

It is impossible to relize a local maximum of amplitude of a stationary magnetic-field magnitude in free space, but a local minimum may be produced. The low–field seeking atoms are can be trapped in vicinity of the local minimum of the amplitude of the field.

Typically, magnetic traps have relatively shallow field minima and are only able to trap atoms whose kinetic energies correspond to temperatures of a fraction of a kelvin. The field minima required for magnetic trapping can be produced in a variety of ways. These include permanent magnet traps, Ioffe configuration traps, QUIC traps and others. The z-type trap shown in the picture happened to be to easy to manufacture and efficient.

The minimum magnitude of the magnetic field can be realized with the "atom microchip".[7] One of the first microchip atomic traps is shown on the right. The Z-shaped conductor (actually the golden Z-shaped strip painted on the Si surface) is placed into the uniform magnetic field (the field's source is not shown in the figure). Only atoms with positive spin-field energy were trapped. To prevent the mixing of spin states, the external magnetic field was inclined in the plane of the chip, providing the adiabatic rotation of the spin at the movement of the atom. In the first approximation, magnitude (but not orientation) of the magnetic field is responsible for effective energy of the trapped atom. The chip shown is 2 cm x 2 cm; this size was chosen for ease in manufacture. In principle, the size of such microchip traps can be drastically reduced. An array of such traps can be manufactured with conventional lithographic methods; such an array is considered a prototype of a q-bit memory cell for the quantum computer. Ways of transferring atoms and/or q-bits between traps are under development; the adiabatic optical (with off-resonant frequencies) and/or the electrical control (with additional electrodes) is assumed.

The Bose-Einstein condensation (BEC) requires conditions of very high density and very low temperature in a gas of atoms. Laser cooling in a magneto-optical trap (MOT) is typically used to cool atoms down to the microkelvin range. Such atoms are used to populate the trap. Then the further cooling can be achieved by the evaporation (by the price of reduction of amount of trapped atoms).

The first microchip trap shown in the figure had size of order of 2 cm, but the way it is manufactured allows the drastic reduction of size.

Trapping of other particles

The possibility to trap also neutrons in a microchip trap is discussed but not yet reported. The magnetic moment of a neutron is 3 orders of magnitude smaller than that of an atom; so, the magnetic fields should be much stronger, but the main problem is with the primary cooling. The elastic scattering of neutrons in cold Beryllium or heavy hydrogen atoms could cool neutrons to few kelvin, but there are still several orders of magnitude of energy that should be drained, and this drain cannot be realized with optically-driven transitions, as in the case of atoms in the magneto-optical traps; the trapping of sufficient amount of microkelvin dumping atoms is difficult due to the small cross-section of scattering of neutrons (which is determined by the nuclear scale, not by the atomic sizes); the macroscopic amount of dumping atoms should be trapped, while the only of order of million cold trapped atoms are realized. Perhaps, still few orders of magnitude in the efficiency of trapping of atoms should be achieved before to trap neutrons.