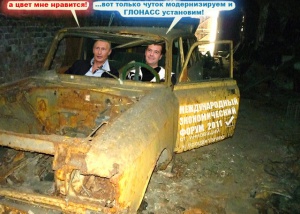 St. Petersburg International Economic Forum is generic name for the series of meetings in support of the ruling party in Russia.

The meeting is organized by the edros functionaries such as Elvira Nabiulina, famous for her false predictions about the economical crisis, and Valentina Matvienko, famous by the collecting of 97% of votes at the "secret" election.

In TORY, this meeting is promoted by User:91.207.6.82; the way of promotion indicates the negative opinion about the meeting and its organizers. The collection of other opinions in process.