Science (Наука) is way of satisfaction of the personal curiosity of researchers, based on concepts satisfying all the 6 axioms below:

S1. Applicability: Each concept has certain limited range of validity, distinguishable from the empty set.

S4. Self-consistency: No internal contradictions of the concept are known.

These axioms are suggested to be considered as core of the science that remains through all the scientific revolutions; the governmental support of the research based on a concept that does not satisfy at least one of the axioms above should be qualified as fraud [1][2].

The Axioms above are declared at the Main page of TORI. The sections below explain, why each of them is necessary. 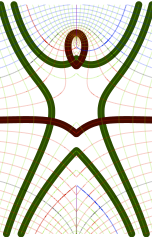 The main goal of the classification of knowledge is to distinguish science from pseudo-science [3]. No assumptions about wether the concept is true or not is assumed at the firs stage of the classification. The axioms S1-S6 does not say anything about correctness or wrongness of a concept.

Instead, the concept is supposed to have some (non empty) set of applicability. The disqualification of concepts that are valid in all cases is based on the empiric observation that any "omnipotent" concept usually happen to make bad, non–correct predictions.

It is important to link any concept to the semantic of the commonly accepted language. Therefore, the ability to describe some predictions of a scientific concept in some already accepted system of notations is essential.

Refutability is introduced by Karl Popper [4][5][6], although the word falsifiability he uses is ambiguous; therefore, in TORI, the term refutability is used. This terminology is discussed in the article Place of science in the human knowledge.

The idea of Popper is simple: if any result of any experiment can be interpreted in favor of some concept, this means, that no predictions can be done with this concept. In such a way, the axiom of refutability is pretty pragmatic.

The ability to share the knowledge is very attractive. For the spread of knowledge, it is important that various colleagues, using the concept, come to the same conclusions and predictions. Any internal contradiction allows opposite predictions. Any dialectics should be excluded at very beginning.

The scientific concept may be correct or wrong. Correctness means the ability to describe the reality, to make the efficient, useful predictions.

Every scientific concept should allow the negation, the refutation of itself. One may negate the postulate of the conservation if number of atoms of each kind in an isolated system; one may negate the trajectory as universal way of description of movement of a physical object; one may negate the law of conservation of the energy-momentum or negate the axioms of arithmetics. However, contradiction to the already accepted concepts should be explicitly declared by the authors.

The scientific knowledge is not considered as true or false. The axioms above are just tools that seem to be strong enough to survive any revolutions.

The principle of correspondence is important as a latch that does not allow to lost a knowledge during a scientific revolution.

If come research claims that the kind of the tree is determined by the conditions (not by the kind of the seed from which it grows), it should be indicated, in which cases the seed of birch still grows into the birch, not to a pine.

In such a way, the definition of science is ready to the strongest scientific revolutions, including the break of the laws of arithmetics, if such a break is explicitly declared.

Due to the axiom S5, any new research, new result, the scientific revolution [7] is supposed to adjust the range of applicability of the old concepts rather than the total negation. In such a way, the axiom S5 does not allow the reduction, decrease, degradation of knowledge. The scientific concept should not pretend to be "the only true".

Other meanings of the term science

Term science may be used also in meanings, different from the definition above. In particular, science may mean also relatively legal way to wash–out the money the government assigns to the fundamental research; in this meaning the term is used in the professional unions of pseudo-scientists like the RAEN. For example, according to such a definition, even the gravitsapa (that concept contradicts the law of conservation of energy-momentum) is interpreted as the scientific achievement.

There are many "intermediate" intepretations of science at various wikis [8][9][10]. Often, the definitions impliy the pretension of science for some objective knowledge. The historic development of the human civilization and evolution of the concepts do not support such a claim; for this reason, the axiomatic definition of the preamble is used in TORI.

The basic statements of this text appear also in the article Place of science in the human knowledge.
The preliminary version of this article is available at http://samlib.ru/k/kuznecow_d_j/science.shtml
The Russian version of this article Наука is available also at http://samlib.ru/k/kuznecow_d_j/hayka.shtml