From TORI
(Redirected from TORI)
Jump to: navigation, search

TORI means Tools for Outstanding Research and Investigation. (Russian transliteration: ТОРИ.) Here, term TORI denotes this site and also the methodology, philosophy or even religion used to built-up this site. 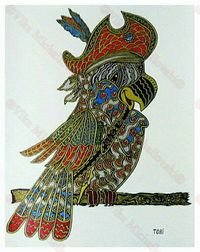 Term TORI has many meanings (in addition to the name of site, that collects "Tools for Outstanding Research and Investigation"). Some of them are mentioned in this section.

Tori is nickname of artist Viktoria Mikhailovski. By her permission, some of her paintings are used to illustrate articles of TORI in the first meaning.

Also, Tori (鳥) is name of first admin of this site (since 2011 to June 2013). Some operational systems do not distinguish lower case letters from capital letters; this causes confusions.

TORI should not be confused with Tory which is name of the British Conservative party. Some automatic grammars to not yet recognize TORI and try to "correct" it to Tory.

Also, TORI should not be confused with the official site of the Institute for Laser Science, http://www.ils.uec.ac.jp

TORI is constructed on the base of 6 axioms. Each scientific concept is assumed to have the following properties:

In TORI, the development and analysis of the concepts satisfying the axioms S1-S6 is called science [1][2][3]. The colleagues who accept the axioms above are cordially invited to participate as authors, editors and/or reviewers of TORI.

More detailed justification of the TORI axioms is suggested in manuscript TORI axioms and the application in Physics [4].

More detailed description of these properties, the heneralisation are presented in article Superfunction and in book Superfunctions. The logo shows an example of that is considered as science here.

The main working language of TORI is English, but the texts may be also in Japanese, in Russian, in Spanish or in other languages. The translations and the links to the translations are welcomed. The texts may be scientific, religious or artistic; the religious and artistic texts are supposed to be illustrations for scientific texts. Colleagues who want to collaborate, should send their short CV (preferably less than one screen) to the Top Editor, dmitriiKouznetsov(at)gmail.com

The quality of texts for TORI is estimated by the Main Editor; if possible – on the base of opinions of the voluntary reviewers; so, the post-moderation is assumed. The texts should allow the free distribution; the primary sources (if copypasted from already published articles) should be attributed. The attribution is important to simplify the tracing (and correction) of errors, if any.

The main orientation of TORI is Science; especially Mathematics and Physics; other topics may appear as they touch Science. Especially interesting is Laser science, as it deals with one of the most developed applications of Quantum mechanics. In order see what is it about, one may look at the article ILS.

TORI represent mainly the doubtful concepts; concepts, that stay outside from the main stream of the scientific research; concept that cause discussions. For the official information about our Institute, please, go to the official site http://www.ils.uec.ac.jp

Some articles TORI apply not only to Physics, but to other sciences too. The declarations of the Russian representatives about Katyn-2 are examples of violation of logic; the news about the Nevsky_Express_bombing_(2009) appear as violation of the principle of causality, the claims about gravitsapa (and other activity of the Khrunichev's center and, especially, the Maximov's institute) contradict the law of conservation of energy-momentum. The Fukushima disaster appeared because it affects the development of TORI. However, even in these cases, the 6 axioms above still apply to the concepts suggested (for example, apply to the question Who contaminates Japan?). Since 2012 the situation about Fukushima normalized and the main orientation of TORI recovered. However, some deviations due to, for example, fraud at the 2011.12.04.Election may happen from time to time, the world-wide frauds are analyzed with high priority. The same apply to the statements of some colleagues about Skolkovo. If someone believe that Skolkovo is scientific center, one may express this point of view, confirming it with links to the results obtained at Skolkovo.

The content of TORI may be used for free; however the source should be attributed. It is not for the keeping of the priority, but to simplify the tracing and correction of errors, if any.

TORI is not expected to compete with Wikipedia, Citizendium, nor with other wikis. Some articles from there are imported to simplify the referencing, but the most of TORI articles are supposed to express some view pretty different from that of other resources. Such a view, according to the axioms above, should be justified. This justification appears as critics.

No any customs, additional to the 6 axioms declared, are accepted as canonical; all the other statements are considered as refutable concepts and must allow the critics. In this sense, TORI is very critical.

TORI represents the point of view of the Top Editor, namely Dmitrii Kouznetsov, and not the policy of the ILS. Therefore, critics of TORI and the suggestions about the improvement should be send directly to the Editor DmitriiKouznetsov(ɑ)gmail.com .

If You think, that your point of view is important for the Science, as it is defined above, please express it in a form, suitable for copypasting "as is". Your text may include critics of TORI.

The content of TORI is compiled on the base of work of many colleagues; and the achievements described in TORI are assumed to be attributed to the Scientific Community. However, all the mistakes and all the cases of unilateral representation of phenomena and events are just errors of the Editor. The indications of these errors are appreciated; they will be corrected as soon as possible.

It you look for some "instanding" concept, then, TORI may be not best place to begin with. You may go to Citizendium, Wikipedia, cyclowiki, etc.
TORI is created for the collection and development of concepts satisfying all the 6 axioms below; such concepts are qualified as scientific. This makes difference between TORI and sites of other "outstanding" philosophies (religious cults, political parties, etc.)

TORI represent the point of view of the Editor. If you disagree with some statements, you should criticize them and suggest your statement, your concept on the topic.
The critics and suggestions can be sent to dmitriiKouznetsov@gmail.com

Attempts to remove the existing content, instead of to express your point of view, are qualified as vandalism, scientific misconduct, censorship and elements of fascism and inquisition.