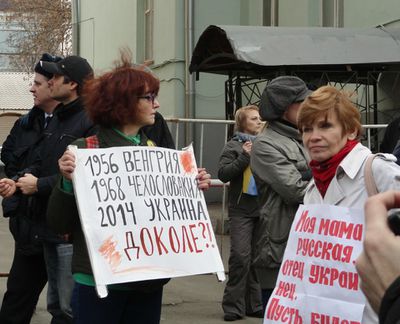 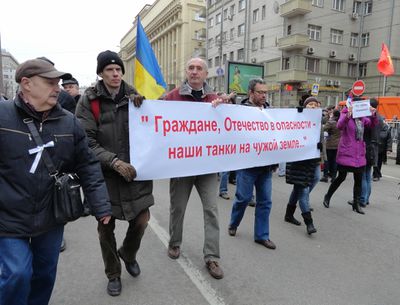 Often the aggression is recognised only by a small part of population of a country–aggressor; and protest is one of ways to explain to the compatriots, what is happening.

Here, the links on the topic ate collected.

2014.04.23. https://petitions.whitehouse.gov/petition/designate-russia-state-sponsor-terrorism/XMjbTltM WE PETITION THE OBAMA ADMINISTRATION TO: Designate Russia as "State Sponsor of Terrorism" In its unannounced war against Ukraine, Russia relies on covert operations which fall squarely within the definition of "international terrorism" under 18 U.S.C. § 2331. Specifically, armed operatives of Russia, acting under disguise, attempt to influence the policy of Ukrainian government by intimidation or coercion. They also try to affect the conduct of a government by assassinations and kidnapping, taking by force government buildings, police posts and military bases of Ukraine. This activity is being conducted on large scale and over prolonged time period, despite condemnation by the USA, G-7, NATO, EU and UN. Accordingly, Russia must be officially designated as "State sponsor of terrorism", per http://www.state.gov/j/ct/list/c14151.htm Created: Apr 23, 2014 .

2014.05.07. https://petitions.whitehouse.gov/petition/demand-russia-de-occupy-territories-moldova-republic-georgia-and-ukraine/Shb8HNfL WE PETITION THE OBAMA ADMINISTRATION TO: Demand Russia to de-occupy territories of Moldova, Republic of Georgia, and Ukraine To prevent ongoing occupation of Ukraine and future potential occupations of former Soviet republics, such as Belarus, Kazakhstan, Armenia, Baltic countries, and other, Russian neo-imperial military machine needs to be stopped now. We need to demand Russia to unconditionally withdraw its all armed forces from the territories of Moldova (Transnistria), Georgia (Abkhazia and Tskhinvali Region) and Ukraine (Crimea). Until complete de-occupation of all three countries (Moldova, Georgia, Ukraine) happens, total economic embargo on Russia, identical to what Iran, North Korea and other politically similar regimes are experiencing today, should by imposed by the global community. Created: May 07, 2014.