This story happened in the ever-memorable times of the era of the great construction of communism in one single country. In one of the central (representative and prestigious) schools in the capital of one of the Soviet republics, there was one honest and, at that time, ideologically savvy teacher of Russian language and literature, for example, Galina Petrovna, worked. She was an experienced teacher, she knew well her job, and could be qualified as conscientious and beloved teacher.

The planned exacerbation of communism in one local republican department of public education (city department) was approaching. The brigade of inspectors was expected to land in one of public city school. It was supposed to be formed from the luminaries of the local education, offees from the local committee of the Communist Party and high representatives from Moscow.

They inspectors had to visit the class, to seat at the rear desks during th elessons and to evaluate both, work of teachers and that of students. There was also opinion, that the inspectors may suddenly ask someone a difficult question on the topic of the lesson, and the wrong answer should have catastrophic sequences for the students, for the teacher and for the administration of the school. In such a way, the inpection had been considered as a serious disaster, and the teachers had to be well prepared to it.

And so, on the eve of this event, the headmaster of the school gathered everyone, including our heroine, and warned about the upcoming event. The revision is annual, but "special"; the commission will include people even "from Moscow." Everything should be at a cosmic level, the wool should stand on end, heels together, socks apart and, God forbid, something will not be ideologically sustained. Yes, yes, I address to you, Galina Petrovna, I mean that you, too, would carefully work on your examples about the Russian forest and the poems of the decadents and in general. And if everything goes right, and the math problems are about overfulfillment of the production plan, and not about apples and pools, then everything will be just fine and no one will be deprived of awards, and I will not be removed from my post in my old age. Do you understand? 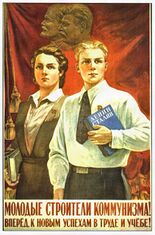 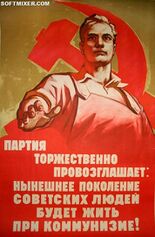 Throughout the night, Galina Petrovna was composing examples for tomorrow's lesson on sentence forms. She had replaced the sentence about apples and rabbits to the cliches of the Soviet propaganda. There was not difficult to fund the examples; time, any newspaper "Pravda" and even "Izvestia" dazzled with them daily:
“Our Motherland is the Soviet Union”,
“The goal of the Soviet man is to build communism”,
“The Soviet people aprove the program of Party”
and to on.
Galina Petrovna replaced all the samples to the statements of Sovetism and stopped to worry, .Everything will be fine, she repeated to herself, everything will be okay.

The great day has come. Strict people in good suits and ladies with deputy badges took the places assigned to the poor students, and in the corner sat the school director herself, who had special hopes for Galina Petrovna, as one of the best in her business. Galina Petrovna took a deep breath and announced the topic of the lesson:
– «The forms of sentences in the Russian language.»
Or something similar to that. The commission relaxed and began to drift off to sleep.

Galina Pertovna wrote on the blackboard:
"Our Homeland is the Soviet Union."
"The goal of the Soviet men ..."
And so on. Then she announced:
– «Who will build the interrogative form of the first sentence?.. So.. Ivanova!»
– «Is the Soviet Union our Motherland?»
– «Correct, sit down! Second sentence.. Petrov!»
– «Is the goal of Soviet people to build communism?»
– «Right, sit down.»
..

Everything was going well, the class and the teacher relaxed. After a time, the head of the Commission awoke, opened his eyes ans begun to listen, what do the students report.

Suddenly the ominous silence happened.
A stifled "Oops .." came from the corner, where the director was sitting.
The chairman of the commission rose slowly from his seat. His face was purple and his mouth gasped for air.
– «Wha.. what.. what do you allow yourself! ... How dare you! ... This ... this ... a crime ... no! This is ... almost sabotage ... treason!»

Mortified Galina Petrovna turned to the blackboard and suddenly realized the negative form of the next sentence:
"No, the building of communism is not goal of the Soviet people!"

There is no need to describe the continuation. The light faded in the eyes of Galina Petrovna; in a stupor, she sat down on a chair, seeing nothing and hearing nothing. The commission, headed by the furious chairman, with a stomp, left the class; students were frozen like in a photograph, they slowly began to catch, what is happening.

To the honor of the then party beau monde, they were mostly realists, and even in the national republics there were few naive and ideologically oriented people, and people with humor and quick-wittedness also turned out to be in the city council. Galina Petrovna got off with a public showdown at an emergency teachers' council, although the lady-director was absent, as she felt into a hospital with the heart attack. The party organizer, who was also dragged out in the city party committee, upset with her. History is silent on details. There were rumors that on the sidelines of local party bodies, the collective unofficial neighing was spread, since possession of grammatic forms suggests, that practically any phrase of any document be quickly turned into an ideological attack, which undoubtedly improved the musty atmosphere of the era of stagnation.