Content of this site depends on the operational system, used to access it. One example is mentioned below.

Tale Neznaika at Moon (Незнайка на Луне) is Russian fairy tale by Nikolai Nosov from year 1967 (or even earlier). The clean version (without off-topic advertisement), with hundreds illustrations is loaded at
https://mizugadro.mydns.jp/w/Neznaika/NeznaikaMoon.html
its view at mizugadro is supposed to be the same, being loaded from different computers.

There, the look of this fairy tale depends on the computer, used to browse the site. Here are three screenshots of viewing of the same URL from different computers: 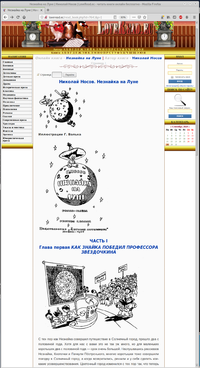 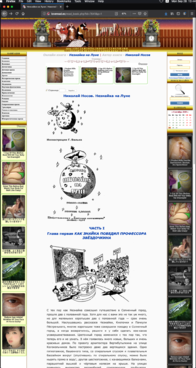 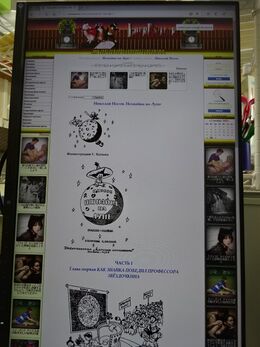 In the last two cases, the pictures appear at the top, at the left and at the right hand side of the children's fairy tale. The pictures are actually links to sites, that are of low quality and too complicated for children. Adding these pics and links may be interpreted as an abuse, a trolling.

The advertisement pics, seen with Windows, are not the same, as those, seen with Macintosh; at least their order is different. This makes different citing of content of loveread site: its content depends on the computer used to read it.

It is interesting to reveal, at which stage of transmittance of information, the additional (and unwanted) pictures and links appear. The following hypothesis should be considered:

Bug at Macintosh and at the Windows machines

1. The bug, badware is installed at Macintosh computer as well as at the Windows machine; that bug disturbs the reading of the fairy tale with parasite off-topic advertisement.

The bug, badware is installed at the Linux computer, that hides the advertisement, in order to confuse the Editor in such a way, that the Editor promotes the link, that shows bad advertisements at sides of the fairy tale.

The bug, badware is installed at some of nodes of the communication line, that itersepts the communication and replaces the original content of the site with the similar surrogate, dependently on the operational system, from there the request had been sent.

The same refers to several Russian sites ("Sputinik", "Roskosmos", etc.), the content of these sites suddenly change or even disappear as soon, as it is revealed, that the information posted shows the fraud by the Russian administration. Such an instability makes necessary copying of all important information of such a kind, and posting the reserve copies. However, such a reposting does not indicate, that the reposted information is true; it only indicates, that at the moment of loading, the certain content had been observed at the certain site.

The sites with varying (and disappearing) content can be considered as an upgrade of practice of removal of the historic documents, described in utopia Orwell1984.

However, the unstable site with off-topics may be subject of the scientific research - in the same way, as insects, who live only few days, or as unstable nuclei or as elementary particles with short lifetime can be investigated with scientific methods.