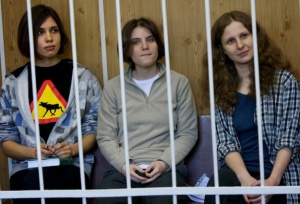 Political prisoner (политический заключенный) is someone who is in prison or concentration camp because of his or her critical opinion about government of his or her own country, or not sufficient support of that government.

In the similar sense the term is defined in wikipedia [2].

Usually, the term is attributed to the USSR or to the post-soviet Russia; however it can be applied to other countries too, especially in the countries with autocratic (for example, pro–communistic) government. In particular, those who are jailed for not following the customs and canons of the official religion, are considered as political prisoners.

In the USSR the official religion was bolshevism; it postulates the Soviet concept of history. in many cases, the public expression of doubts in that concept were sufficient reason to jail the heretic, making him or her a political prisoner. Any deviation from the official doctrine (sovetism) was qualified as antisovetism and considered as a serious crime.

After the USSR, in the begining of century 2, the official religion changes to the Russian Orthodox Church, which pretends to be a branch of Christianity. The news about that religion indicate, that it does not accept the main concepts of the New Testament, and in particular, justifies the serious punishment of opponents with pretext that for them it is better to be punished during their Earth life than to be punished after their death. Practically, the most of phenomena of sadism can be justified with such a pretext. According to the definition, such a practice is qualified as Inquisition; victims of inquisitions are qualified as political prisoners.

In year 2012, in Russia, the most famous are the artists of the musical group Pussy Riot – Maria Akyokhina, Yekaterina Samitsevich and Nadezhda Tolokonnikova, for the deviation from the customs of the Russian Orthodox Church in the video Pank–moleben. Several seconds of that video were filmed in the commercial center Cathedral of Christ the Saviour in Moscow. The accusation claims that during these seconds, the security workers got serious mental injuries and since that cannot perform their job. Also, some sellers at that commercial center claim that they cannot count money after that event. In addition, some of declarations by the workers of that commercial center are revealed to be copied from each other. As the judge Marina Syrova had rejected the suggestion by the defendants to analyze the literal copypasts in the statements by the eyewitness, those statements are believed to be just false. Similar false eyewitnesses are described in the New Testament, when the top priest Caiaphas used them to organize the killing of Jesus Christ. The analogy with both, the medieval inquisition and with killers of Jesus Christ make the Pussy Riot trial famous, and made the artists to be most known political prisoners.

Several lists of contemporary politic prisoners are available in the internet. [3][4]