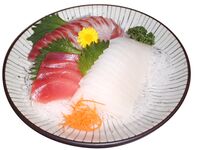 Sakana as a dish

Sakana refers to the set of the following unicode characters:

Also, term Sakana may refer to sound さかな. This pronunciation refers to each of these characters.

In addition, term Sacana may refer to an object, denoted with this sound, id est, any fish; for example, that shown in Fig.1.

The sakana characters look similar to each other.

In order to distinguish these characters, some programming is necessary.

The Utf8 encoding of ⿂ and 魚 can be revealed with PHP program du.t; command

Sakana (fish) as a food (dish) is mentioned in the poem: