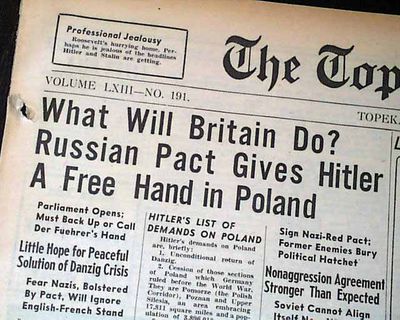 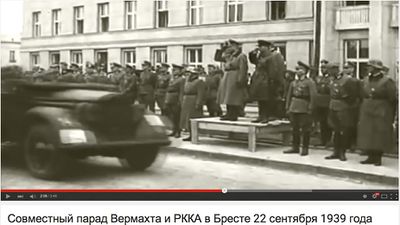 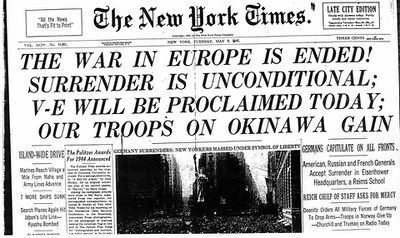 World War II ( Вторая Мировая война, 1939–1945 ) is considered as biggest war during the history of Humanity. This article represents the point of view, based mainly on the cryptical analysis of Soviet concept of history and Sovietism. This article does cannot substitute the professional researches about history of century 20. This article is only a draft, sketch, and it is expected to be extended in future.

The Russian invasion into Geoogia in 2008 and The Russian invasion into Ukraine in 2014–2015 (precisely a century since the World War I) can be considered as beginning of the new world war, that could be denoted as "World War III". At least for 2015, the scale of these wars is small, compared to World War III"; the count of deaths is believed to be thousands, not millions, as in World War I and World War II. In order to avoid confusions, the battles of Russian troops in Georgia (2008), Ukraine (2014–2015) and Syria (2015) are denoted as Putin world war, with certain hopes, that these conflicts will not scale up to the level of World War I and World War II.

In years 1920–1930, Fascism and militarism becomes the main doctrine of governments in the USSR, Germany, Italy and Japan. After to kill the most of population of the USSR, Bolshevism was looking for new slaves in Europe. Soviet army was not sufficient to bring the "world revolution" to Europe. This predetermined the union with nazi Germany.

The beginning of the war was successfuul for both, the USSR and Germany; many countries were occupied.

Then, November–December 1939, Russian army met serious problems invading Finland. Although the bombing of Helisinki and other cities of FInland were successful (many thousand civilian people were killed), the ground operation of soviet troops met serious resistance at the Mannerheim line and the best divisions of the Red Army were exterminated. The red army, that is most powerful in Europe of year 1930s, becomes weak end demoralised for the beginning of 1940s.

In 1941, the misunderstanding between Stalin and Hitler (fuhrers of the USSR and Germany) takes place, and the World War II comes to the territory of the USSR. The war brings the defeat of the Soviet troops; significant part of population of the USSR is killed

The world–wide character of the conflict in 1030–1945 had been predetermined by the agreement between Hitler and Stalin, often called as Molotov–Ribbentrop pact. This agreement specified collaboration of Germany with the USSR in military invasions and occupation of many European countries.

The Soviet regime of Lenin and Stalin seems to be the most destructive state for the whole Human history. The aggressive goals of the USSR caused no doubts since the beginning of the USSR (1917); the claims of bolshevism for the world–wide dominancy with the world–wide proletarian revolution were not a secret. However, the mass genocide, mass terror murdering of the most of farmers, engineers, scientists did not gave the Soviet veterans any chance for the world–wide dominance. Since the agreement of Hitler with Stalin, the cumulative power of Germany and USSR became dangerous. The union with the USSR indicated, that the Hitler's Germany is so aggressive, as the USSR. 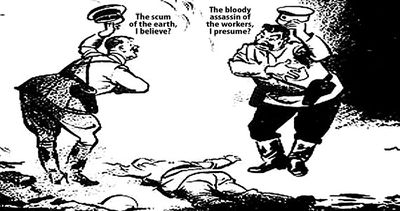 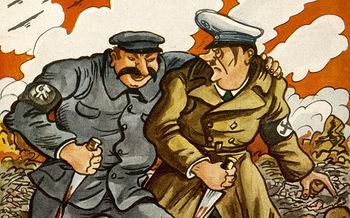 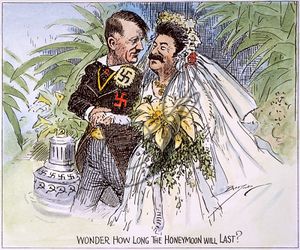 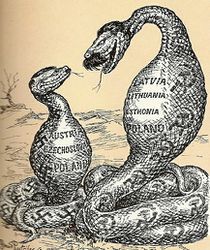 This article is for collection of publications, and does not pretend to be full description of the World War II.