屮 can be pronounced as "che" and reefer to left hand.
(Other ways of the reading and interpretation are also suggested.)

View of character 屮 depends on the software. 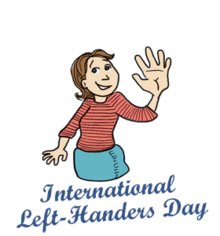 At Linux and at Macintosh, 屮 looks this ways:

Graphical representation of characters reveal the common fault, defect of manuals on Japanese.
They tell, how the things should be (from point of view of the authors) instead to to show, how the things are arranged in century 21.
The manual teach, how do they want students to draw characters, but do not tell, how the characters are already drawn in various default fonts, implemented at various softwares.

If such a character is printed, the correct specification is:

Term JapanPsi is defined as substitute of this (long and complicated) construction.

The software also confuses characters from set JapanPsi. Perhaps, the most of descriptions of X5C6E 屮 can be applied to other JapanPsi characters too.

Suggestions by various dictionaries are collected below.

Jisho and Nihongomaster suggest similar descriptions of JapanPsi, but the descriptions do not match that by Kotobank nor that by Goo.

It is strange, that the character with simple graphic has no established meaning.