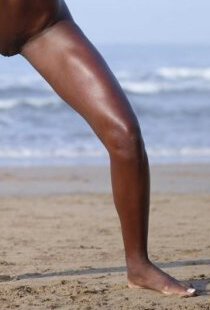 Ashi (Radical 157) is set of the following Unicode characters:

These characters have similar graphical representations, similar pronunciations (for example, "ashi", あし) and similar meanings; they may refer to a leg(s) or to feet (foot) as part(s) of body.

Support of Japanese characters in computers is underdeveloped.
Up to year 2021, there is no united standard for the default font, that would allow each character to look the same at different computers, but different from other characters.

At some computers (Macintosh), images of characters X2F9C ⾜ and X2F9C 足 look so similar, that even a native Japanese speaker, watching 足 and 足, is unlikely to answer:
Which of them is X2F9C?
Which of them is X8DB3?

In such a case, the correct specification of the character would be "X2F9C ⾜ or X2F9C 足"

Such a complicated construction is difficult to pronounce. It can be replaced with single word Ashi or Radical 157.

However, word Radical_157 is difficult to pronounce, if some of characters ⾜, 足 appear in the text.
Term Ashi seems to be more suitable.

There is important question, whether character AshiHan X2ECA ⻊ should be included in to sets Radical 157 and Ashi, or not.

at Macintosh and ⻊,⾜,足 at your computer.

For this reason, in the first versions of definitions to terms Ashi and Radical 157, the AshiHan is not included.

In principle, semantic of Ashi should be narrowed to foot, excluding legs, by using 脚 in sense of leg(s). On the other hand, graphic of character 脚 is complicated; if such a character appears in a printed text or in a displayed text designed for the Human reading, then, the whole paragraph (or the whole article) should appear with font, significantly larger (at least twice larger than that sufficient for Ascii characers); so, the information capacity of the text decreases instead of increasing; and character 脚 is not popular in Japanese.

Character 脚 is not included into BasicJapanese. Instead, ascii word Ashi or hiragana あし may be used, it it does not alter the meaning of the sentence.